It's the last Sunday in February, and fitting for this garbage month, the weather outside is trash. Cold, rainy, and trash. This is the time of year I seriously consider moving somewhere else, where it's warm-ish all year round, and everyone doesn't hate each other. OH WELL. On Thursday it'll be March, and we can all get our hopes up for that month to be warm, but because we live here, it won't be. I really wish we hadn't had that one 72 degree day a week ago, because it really just put into perspective how much I want to be somewhere else. THAT SAID it was 54 degrees yesterday, so I took the opportunity to do the first car project of the year. My adventure with leaking oil 3 weeks ago does not count as car work, because it was fixing a broken thing, and wasn't any fun. 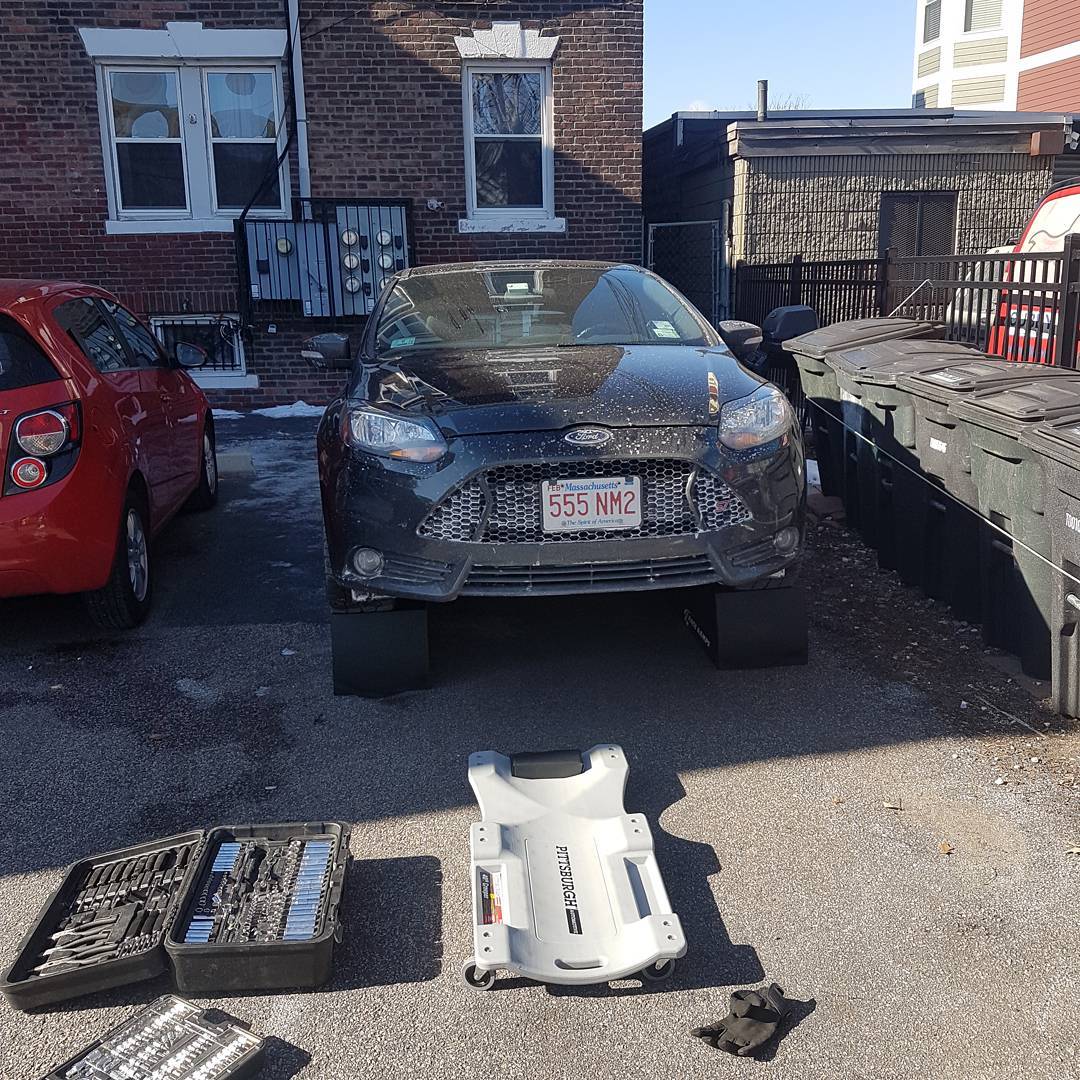 It was the first time I got to use my new Race Ramps though, and man these things are awesome

Three weeks ago, I put together a spreadsheet of car projects. I've spent all Winter thinking about the stuff I wanted to do/couldn't get to in 2018, and finally decided to get it all down on paper. Last year, I did bolt on mods, a new engine tune, new tires, and new brake pads/rotors. This year, the big projects are going to be a complete brake overhaul (including a big brake kit and new stainless steel lines), sealing the frame and undercarriage with POR-15, and potentially sound dampening/weather stripping replacement. Those projects alone are somewhere in the 5k range, and depending on how much I can keep costs down, there are a couple more follow-ons for the summer.

I'm doing a real good job of keeping costs down so far, since I spur-of-the-moment decided to order a $380 drop-in short throw shifter from Ford. It all started when I was installed a novelty shift knob my uncle gave me for Christmas. It wasn't really compatible with my shifter (and it was huge), but it got me curious about other shift knobs, and holy cow are some of them expensive. Like $100! For a knob! Knowing me, I'll probably get one eventually, but I decided instead to look into short throw shift kits. While the stock shifter on the Focus is OK, it is a little bit sloshy, and I've definitely missed shifts as a result. "Throw" refers to the distance you need to move your hand to get the car in a given gear. The short throw shifter has a much shorter lever, and also heavier metal components, which provide much shorter, tighter shifts. I decided to go with the Ford kit because it's a drop-in replacement for the whole assembly, had pretty good reviews, and didn't require me to modify/destroy my shift cables. 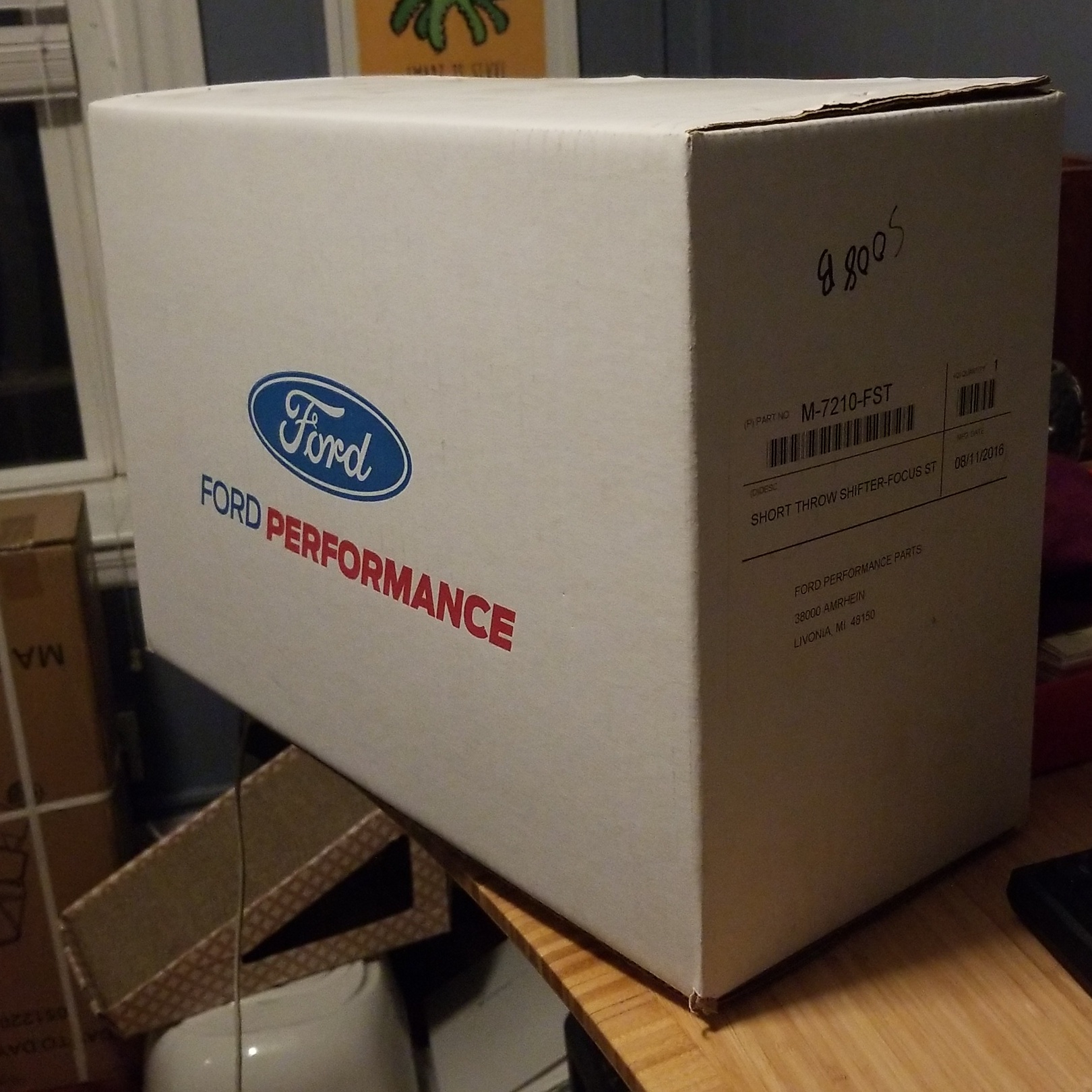 Plus it came in a cool Ford Performance box

The package came last Wednesday, and I didn't think I'd get an opportunity to install it for a month or so, but then the forecast for Sunday was 50 and sunny! Hooray global warming! For this particular project, it was important that the car interior be relatively warm, because I'd have to disassemble the entire center console, and remove a lot of plastic trim panels. From my experience with my Plymouth Voyager, and removing trim panels when the drains got clogged and it filled with water, I know how finicky and breakable the stupid things are. In a black car, in direct sunlight, it easily got up to 70 degrees, so it was simple to remove the panels, the bolts, and wiring harness holding the console to the car. The shifter itself is easy to remove, just 4 bolts. A careful hour or so of work, and we were ready to install the shifter. My favorite part of every project is the point of no return, where you have to keep going or all you did was break the car

Shifter install was easy, and reassembly only took 30 minutes or so, since it's always easier. I went and grabbed Katie, and we went for a test drive. It works great! The shorter lever reduces throw length by ~18%, and I really like the way the car shifts now. No longer clunky, the shifts are firm and controlled, and the metal internals mean that you actually have to supply some real force and don't have to guide the shifts quite as much as before. The new knob also has red accent lettering, which looks nicer than the old black lettering. Once the car was warm, I hopped on 93 so I could row through all the gears, and my shifts were definitely better. Pretty happy when a project goes as smoothly as this one. 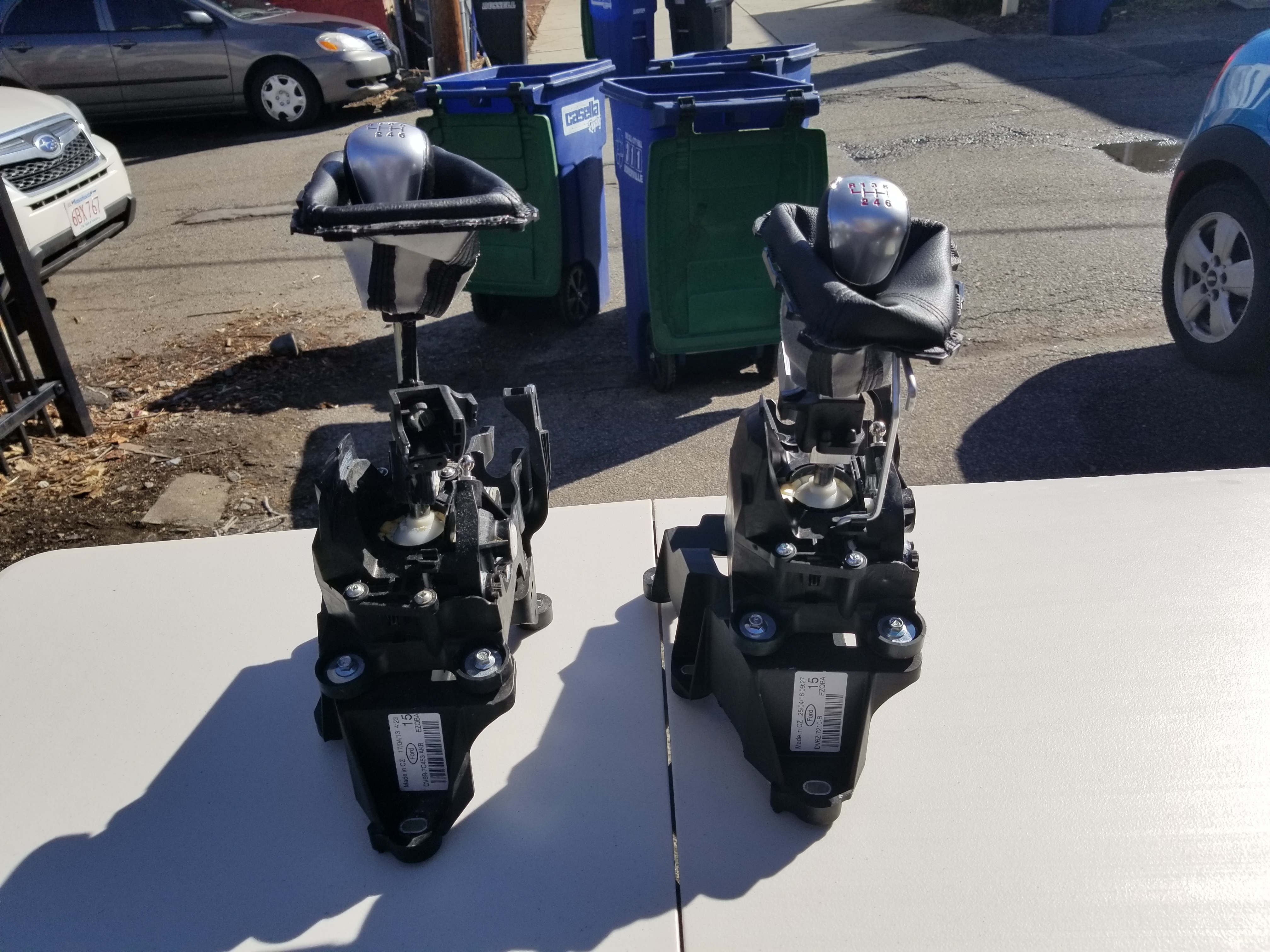 Looks good to me!

After finishing up the shifter, I decided to do my taxes, which (surprisingly) ended up netting me a couple grand, since I massively overpaid Social Security tax this year. I can use that money to buy my brakes! Pretty pissed that I more or less have to pay to have my taxes done now, since the free electronic filing options are limited to incomes < 60k. I'm not complaining about making money, it just seems unfair that I have to file a return, and I have to pay to file it. I'm happy to do it myself, I'm good at math! I wish we'd just do away with the whole thing, and just let the IRS figure it out. OH WELL. That would probably be too much Government Tyranny or something, and the right wouldn't let it stand unless a free gun came with every tax return. I used Turbo Tax and it was fine. It's fine software. I should probably just write my own version and sell it for $10 a pop, unless you own a bunch of mines or something the 1040 is dirt simple and definitely shouldn't cost $100. I'm now sitting here, on the couch, and the cat has made me move the laptop off my lap, because she wanted to sit down. So I guess it's time to end this post, since it's not super comfortable to type like this. Hopefully you've all enjoyed this thrilling edition of mundane things that I do in my spare time. Please come soon, Spring. I can't take much more of this garbage, and I will move to Aruba if it doesn't get warm soon.

It Is Spring, Time For New Spark Plugs

My basement is slowly getting transformed into an auto parts store, so yesterday when we had a nice 55 degree day, I decided to do the first Focus ST project of the year, swapping out my spark plugs.…

It Was Christmas, Time For Food And Server Maintenance

Merry Christmas! If you've been paying attention to New England specific weather reports, you might think that Katie and…