Feels like we've finally turned a bit of a corner! While April is supposed to be generally chilly, we're talking temps in the 40s, and that's good enough for me! Throw in the occasional 50 (or even 60?) degree day, and we're living the good life here in New England. My basement is slowly getting transformed into an auto parts store, so yesterday when we had a nice 55 degree day, I decided to do the first Focus ST project of the year, swapping out my spark plugs.

It's only a little plug, what could go wrong?

You might be wondering why I'm even bothering to change the plugs in the first place. After all the car only has about 40k miles on it, and the stock plugs on the ST are meant to last around 60k miles. Well, you have to remember that I put a tune on the car, and I'm running much higher and longer boost, which means higher temperatures all around. The stock spark plugs are actually pretty good quality Ford plugs, but they aren't really designed for the kinds of loads generated inside the cylinder under high boost! So most tuning shops recommend running plugs one step "colder", which essentially means that they're able to sustain optimal spark at higher temps. This means that the ECU has to do less work to make sure the engine doesn't misfire, and the engine's performance should be more even and predictable.

Internet said this would take me about an hour, but I've actually been nervous about it for weeks. The primary reason is my aftermarket air intake, one of my first car projects, that if I could go back in time I'd probably do a bit differently! The Focus ST has an aluminum cylinder head, and the first time around I stripped out some of the threads in the hole for the bolt that fastens the intake pipe to the head. Not only was I worried about getting the pipe back on, but since I'd already stripped one of the holes on the head, I was worried about stripping the spark plug holes by over torque-ing them! Doing my due diligence, I read countless internet horror stories about snapping off plugs in the head, ceramic getting into the cylinders, shredding the engine. Good times. Once I was sufficiently convinced I was going to destroy the car, I got to work! 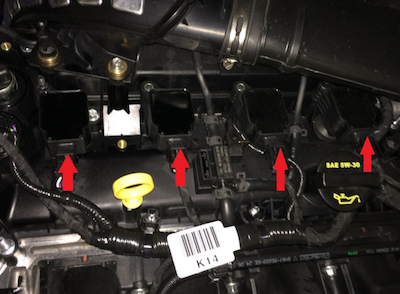 The arrows are pointing at where the plugs are

Installation actually ended up being... straightforward. Surprising, I know. Since I'd already gapped the plugs all I had to do was:

Probably took 15 minutes total. I ended up installing these spark plugs . The iridium tips should make them last a long time, and these NGK plugs have pretty good reviews. According to the internet, after installation I should notice a smoother idle, and more even power delivery, especially under boost. Once I had everything bolted back together, I started the car, and it idled without showing any codes! I went to get Katie so we could get a test drive!

I'd dropped a socket in the engine bay, so before setting off, I had Katie help me put the car up on ramps so I could fish it out from where it was wedged between the skid plate and the traction bar. Used a stick I found next to the car, and the camera on my phone, since I'm too lazy to take the plate off and put it back on. Then, Katie noticed the Check Engine light was on, which is usually a bad sign when you've replaced one of your critical engine components. I was dreading a misfire code due to a bad plug, or because in my quest to not strip the holes, I hadn't torqued the plugs down enough, there wasn't enough compression in the cylinders. Turns out I forgot to plug the MAF sensor back in! I'm dumb, though the "high voltage to intake air sensor" message was possibly the most misleading of all time. The sensor wasn't even connected! Screw you, computer. 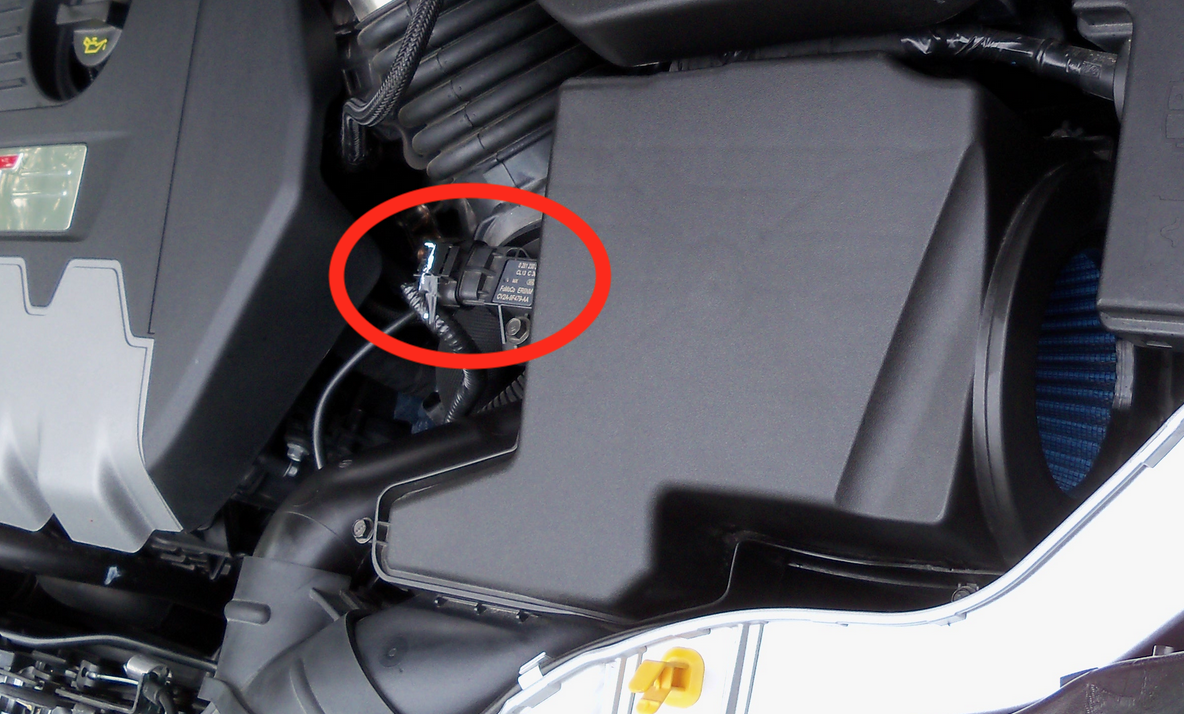 Plugging back in all the things is important

So we set off, easy at first, and everything seemed fine. The car was idling better, far less grumbly than it had been previously. Takes about 15 minutes for us to get somewhere that I can really open up the throttle, so we made our way to I-93 North. On the way, I hesitantly goosed it a few times, and again seemed good. I accelerated a bit on 93, until finally we got off on the stretch of 28 North that I use as a sort of test track. It has a nice straight away and you can see for a pretty long distance, ensuring I'm not putting anyone except myself (and Katie, I guess) at risk by testing out work after servicing the car. Here, I came to a dead stop, and verifying that no-one was around, started rowing the gears at max throttle. In 4th gear, I managed to boost the car to 23 psi at 6000 rpms, which is essentially the engine power I'm ever going to get out of the thing. It worked great! Power delivery was smoother, and temps looked good all around! No codes, no nothing. Katie and I drove around a bit more, went to Trader Joe's, and then went home to watch MST3K. Thanks for being great, car.

Today is Easter and April Fool's day, so we'll be driving to my aunt's this afternoon for dinner. Pretty confident we won't break down, though I'll bring my tools with me just in case. In the next few weeks, hopefully I'll have all the parts and time I need to do the brakes and wheels! I bought a set of new rims, some spacers, some summer tires, and new brake calipers all around, including a Stop Tech ST-40 big brake kit for the front. Gonna look sweet! I dropped off remanfactured rear calipers for red powder coating last week. All in all, I'm pretty excited about Spring. Going to be warm, plenty of projects. Hopefully I can keep the momentum going.

Running Into The Spring

After a series of personal crises, injuries, illnesses, and the bad habits that result, I fell out of running…

It's Not Warm Yet And It's Garbage

It's the last Sunday in February, and fitting for this garbage month, the weather outside is trash. Cold, rainy,…