All of my new parts came 2 weeks early (thanks Cobb!), so I decided that this weekend I'd get to installing them. I ended up ordering a

The first three are performance modifications. The stock Focus ST is pretty great, but it runs a little hot, and if you were to try and tune it (which, I am, with a Cobb Accessport), you need to upgrade some of the components to let in more air, and cooler air. This is where the intercooler and the cold air intake come in. The larger intercooler makes it possible to cool the air that's been compressed by the turbocharger to a bigger extent. The cold air intake lets in more air, from a cooler spot than the stock intake. The last performance mod, the motor mount, merely improves the handling of the car in exchange for a bit more vibration at low RPM. The cat-back exhaust is purely cosmetic, and makes the exhaust tone a bit richer (not tinny). If I didn't live in MA, I could also install a bigger downpipe, but that'd cause me to fail emissions tests. Alas. 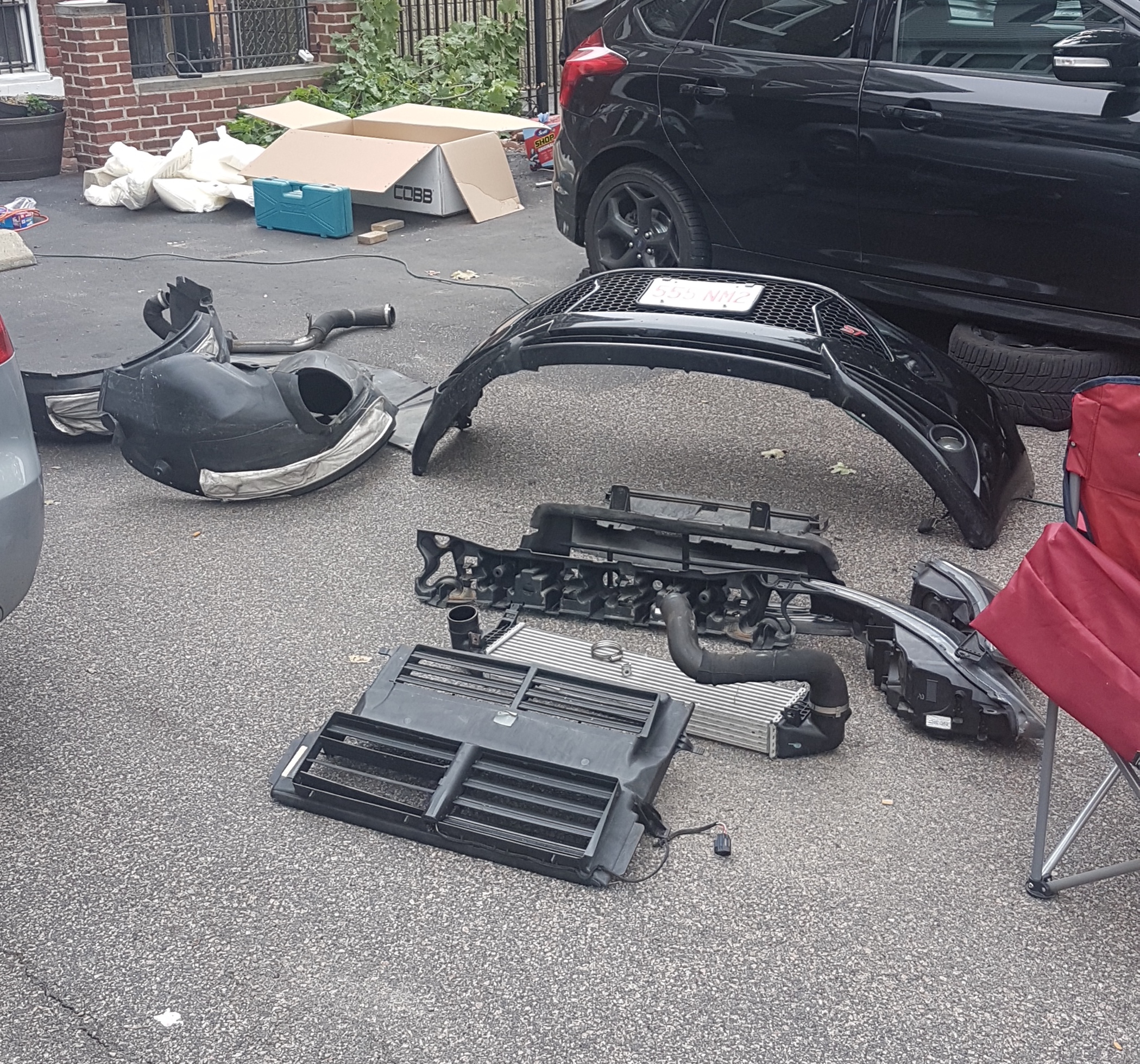 Turns out this is a hard job

Cobb is a shop that provides pretty excellent parts, how-to videos, etc, and they rated replacing the intercooler "4 out of 5 wrenches". I couldn't find any other jobs on their site for the Focus ST that were rated that difficult, so I knew it would be a lot of work. I watched a bunch of videos, read the directions, made sure I had all the parts. Unfortunately, while all the the people in the how-to videos were trained mechanics in beautiful, well equipped shops, all I have is a driveway and some jack stands. I asked my dad to come over and help, since I knew I'd need a hand for some stuff, and he's also pretty good with stuff in general, though by his own admission he'd never done a job as complicated as this. My brother Steve also came by, since he's interested in cars in general. We got started bright and early on Saturday.

Now, the steps for installing the new intercooler are as follows:

Ten steps! That's not so bad, if you ignore the whole "disassembling the front of the car" thing, or the "drilling through the crash bumper part" deal. Disassembling the front of the car was more or less straightforward, though I took my time, as not to break anything, and to internalize where everything went. Removing the old intercooler and pipes, also easy. Drilling through the crash beam... not. The crash beam is 1/8" hardened steel. One eighth. It took us 3 hours to drill two holes. Admittedly, this was mostly caused by us not knowing what the hell we were doing, since neither of us had ever drilled steel that hard. Cobalt bits just dulled, even though we were using tapping fluid. It wasn't until we went out and bought some carbide bits that we were able to chew through the damn thing. If you ever have to drill hard steel, first cobalt, then carbide, using plenty of fluid.

We ran out of light on Saturday, after mounting the core, so we left the car up on stands overnight, and I started again this morning with the charge pipes. In the video, and the guide, they suggest that this is easy. Maybe if you have a lift it's easy. It is not easy. You're on your back, trying to wedge metal pipe into silicone, and have a good fit, and then tighten down a whole bunch of t-clamps... it is a huge pain in the ass. But, I was able to get it done, reassemble the car, etc. Took most of the day though, especially since the hardware kit was missing a grommet I needed, and I had to walk to find a sort-of replacement (that I ended up shredding, anyway, WHATEVER). Finally the car was reassembled, and I went for a test drive! 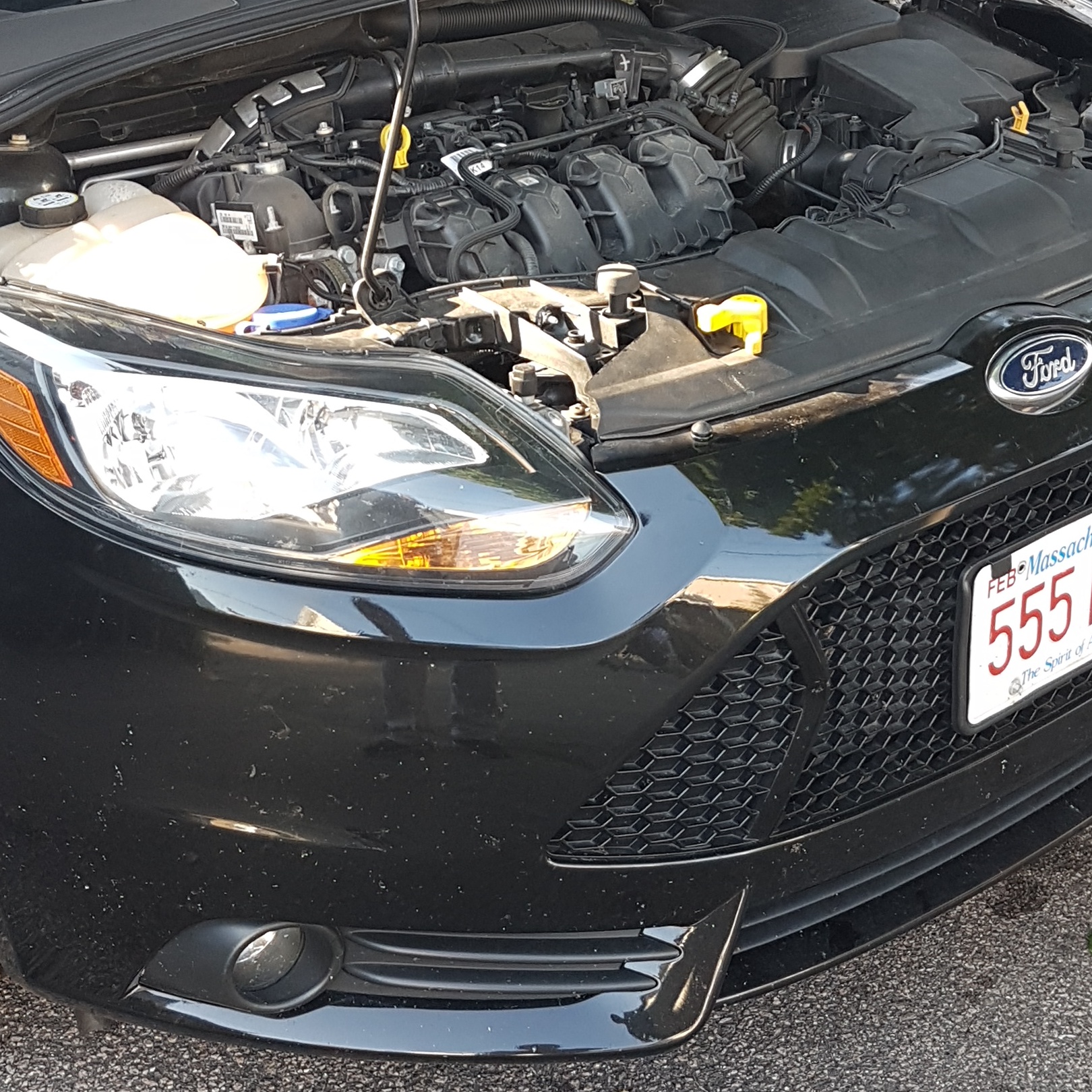 Check out that intercooler! Jokes on you, you can't

I was anticipating a pressure leak from the various pipes I installed, and I was not disappointed. The charge pipes have pressurized air flowing through them, and when the turbo kicks on it usually makes a whoosh sound, with a little whistle. I knew I had a leak because there was a big whistle. Dejectedly, I drove back to my driveway, where I inspected and tightened everything down again. I didn't have to disassemble the car again, because I was able to reach the clamps/hoses by just removing the lower radiator shroud cover. Another test drive, still had a leak. This time, I noticed that the silicone reducer elbow mounted on the turbo looked a little weird, so I loosened the clamp, adjusted the elbow and clamp, and re0tightened it down. On the next test drive, the whistling was, well, less, and I either got rid of the leak or I convinced myself that's how it's always sounded. I drove the crap out of it on some roads and was able to boost it up to the 3/4 mark on the cabin gauge, and I didn't blow out any hoses, so I think it's all set! 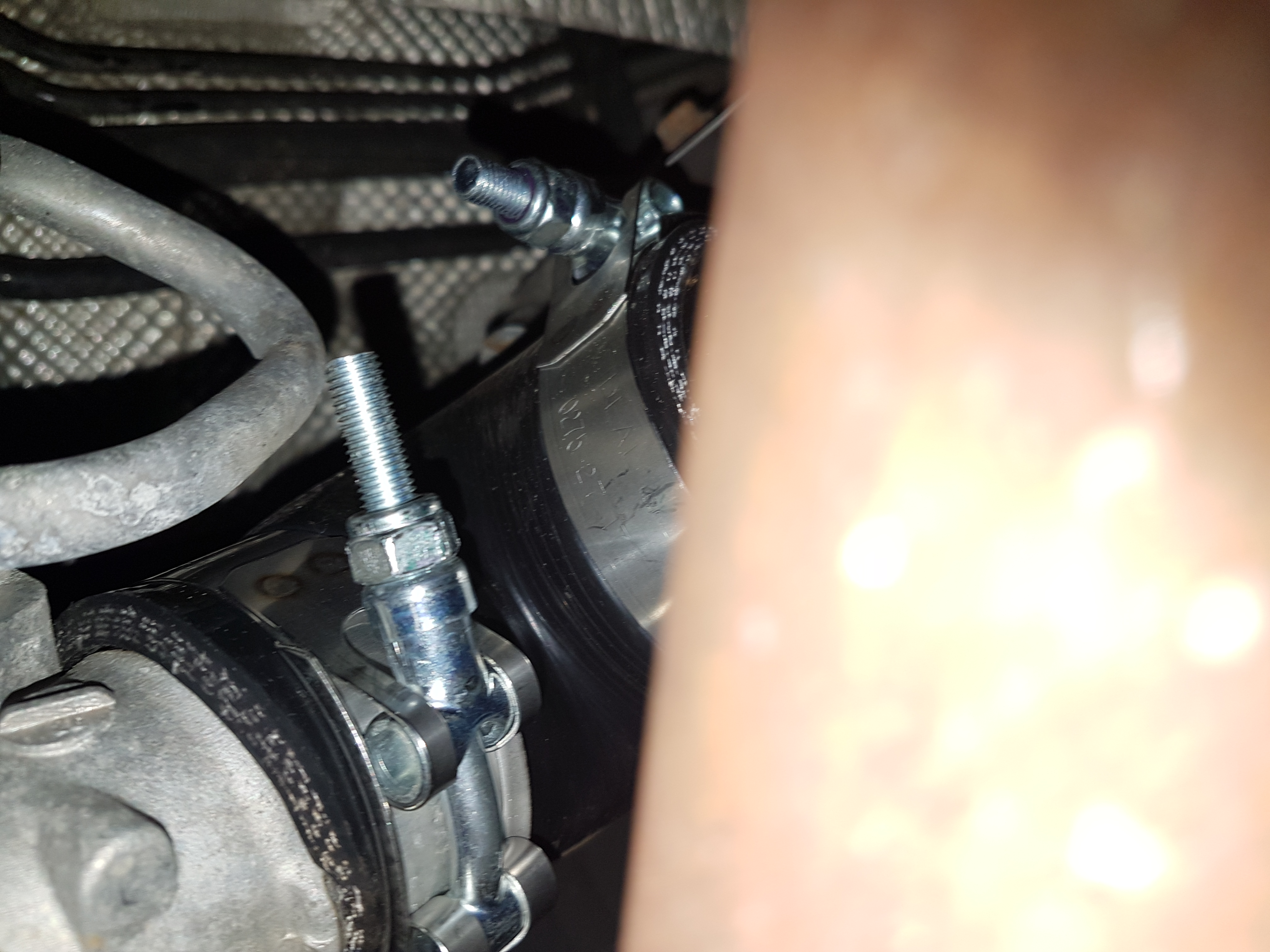 This is the elbow where I'm pretty sure I fixed the leak. The driveshaft is the big brown thing in front.

So I finished my first big mod, and arguably the most complicated one, with probably success! For a good mechanic this job is supposed to take 2-4 hours, and given that I've never done anything this complicated with a car, I feel pretty good about the 16 hours or so I spent on it. It was yet another exercise in getting to know everyone in the neighborhood too. A retired guy from across the street came by and gave us Swedish Fish, and chatted us up about his motorcycle. Some random dude asked us if we knew about cars (we said no). Various people living in my building stopped by to gawk and ask what the hell we were doing. All in all it was a pretty great weekend, and I'm looking forward to doing the other mods this Fall. When all is said and done, it's going to be a fast, screaming, hot little racing hatchback. Or, worth it's weight in scrap metal and parts. Either way I'll have fun.

Made It To Amsterdam

So, I've finally made it to another (mainland) continent. Flying out Wednesday night at 10 pm, I arrived first…

Farm Shares Are A Mixed Bag

Both literally and figuratively. If you don't know what a farm share is, it's a way of prepaying for…