So, I've finally made it to another (mainland) continent. Flying out Wednesday night at 10 pm, I arrived first in Frankfurt, Germany, after a 6 and a half hour flight. I'd never flown on a wide body jet before, and it was pretty comfortable! I slept probably about 2 hours total, which isn't bad for me, honestly, and read while I wasn't asleep. In Frankfurt, I got a coffee, irritating the German man serving me. Or maybe I just thought we was irritated, since all Germans sound angry all the time. On the second leg of the flight, Frankfurt -> Amsterdam, I got a delicious cheese sandwich. Maybe it was just because the only thing I'd eaten in 10 hours was some beef jerky, but goddamn was that sandwich good. Step up your game, other airlines. Lufthansa is killing you on the sandwich front.

In Amsterdam, Kit met me at the airport, and after a short train ride to Amsterdam Central station, we set off to find our Airbnb. There's a pretty great tram system we used to get around with our bags. We made it without any trouble, and the place was pretty nice! The guy left a couple of Heinekens (gross), and the place was clean and modern. The bathroom was horifically small, and there was no bathroom sink, but meh. We didn't spend a lot of time there anyway. Instead, we went out and walked around, checking out what Amsterdam had to offer. It's a pretty cool city, with a nice blend of old and modern culture. Felt similar to Boston in a lot of ways, biggest difference being the constant risk of death by bicycle. I hate driving in Boston, and I certainly wouldn't want to have to drive here. 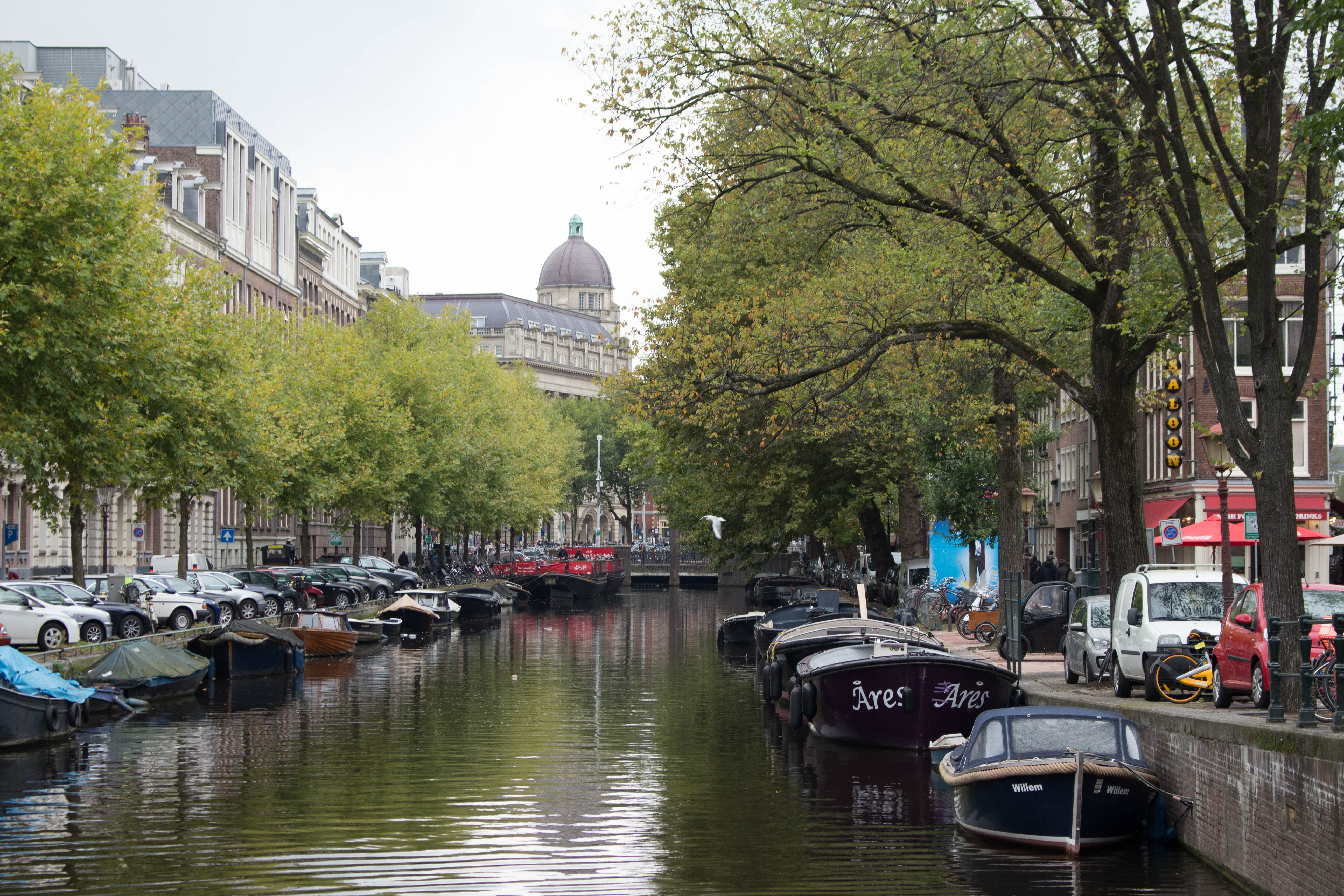 We got dinner at a modern restaurant, and it was a little pricy, but pretty good. I ordered zucchini noodles with a chicken thigh, and it was excellent. The most irritating thing is that everywhere charges you for both still and sparkling water. Like, I'm not even sure tap water is a thing, but I don't want to look like a stupid tourist, and I didn't see anyone else ordering it. Like 3 euro for a tiny little bottle of water, and I normally drink water by the pitcher. Oh well. After dinner, we basically went back to the Airbnb and slept, since we'd both been up for quite a while. Since I'd at least sort-of napped on the plane, I wasn't horrifically tired, but I passed out pretty quick.

The next morning, we got up around 9, and I went for a run. I'm going to try and run in all the cities we stay in, since usually it's a pretty great way to see a lot of stuff. The Amsterdam run was fun, but I need to spend a little more time planning my route. Because I don't have any mobile service, I was afraid of going too far from the Airbnb, even though I do have the Google Maps downloaded for every location we're visiting. There definitely aren't as many runners in Amsterdam as there are in Boston, and I was paranoid that everyone was watching me, but I saw a couple other people out, so it's not totally out of place. I felt similarly paranoid that everyone would judge me for wearing shorts instead of pants, but screw walking around in pants. It's not November yet, shorts are where it's at. 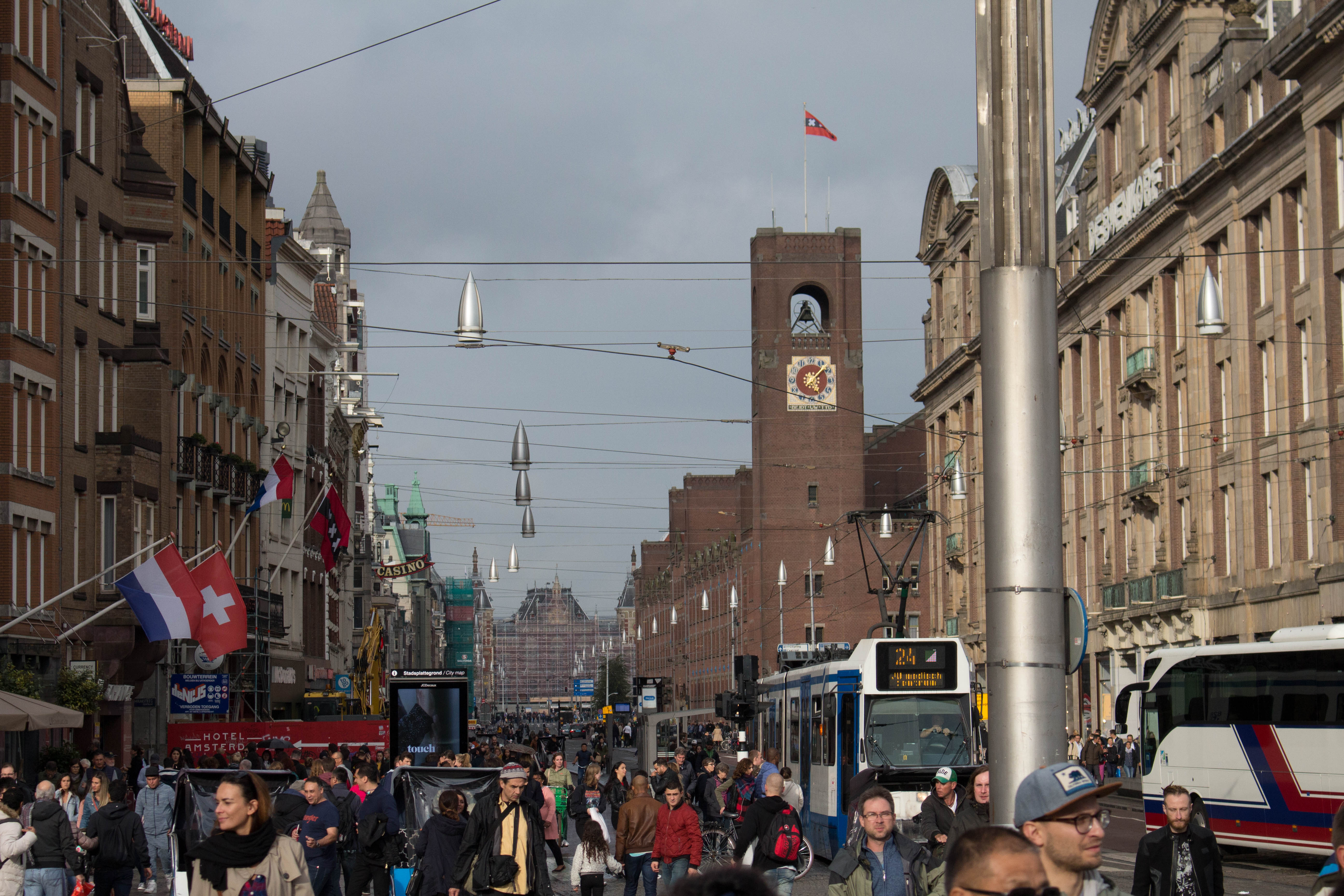 The sidewalks are pretty crowded, but usually not this much, so not hard to run on regular streets

After the run, I went back to the Airbnb, and took a shower. We decided to try and hit one of the major museums. First, we tried the Van Gogh museum, but there was a line to get tickets, then a line to use the tickets, and we would have had to come back in like 2 hours since the tickets are timeboxed. So instead, we decided to hit the Rijksmuseum. The Rijksmuseum is "the Rembrandt one", and this is reflected in all of their advertising. However, it did have other sections, with a lot of middle ages/early rennessaince art and artifacts. I really loved the furniture most, to be honest. Very high quality, handmade furniture for rich and aristocratic types. They also had some Van Gogh stuff too, including his self portrait with the hat! That was cool to see. Of course, we also saw some Rembrandt pieces, as well as some modern Dutch art. All in all it was a pretty great museum.

For lunch, we hit up the "Hansel and Gretel Cafe", which was pretty much a dive bar but who the hell knows. Got a smoked salmon and cream cheese club sandwich on brown bread, which was good for the money. For dinner, we went to Moeder's, which is just Dutch for Mother's, a restaurant that serves Dutch food. It was a fun place, where you can bring pictures of "mothers" to put on the wall (the walls were covered in them). I got something called "Hachee", which was a pot beef stew with onions, boiled potatoes, and a side of red cabbage. Aside from the cabbage, it was essentially the same as any beef stew or pot roast I ate growing up, and it was delicious. Before heading home, we decided to walk through the red light district, which was hilariously tame. There's no advertising allowed, except for scantily clad women standing in the windows, and it's right next door to, like, regular city restaurants and stuff.

So now, we're on the train to Bruges, which we decided to visit on the way (sort of) to Brussels, since we're spending all day tomorrow in Brussels, too. We switched trains once, in Antwerp, from a legit train with wi-fi, etc, to a more local-style commuter train. Grabbed some premade salads from a convenience store for lunch, which were surprisingly good. We'll spend a few hours in Bruges, take some pictures, carrying around our heavy bags, then catch the train to Brussels. Everyone else is already starting to arrive there, probably super jet lagged, so we'll get a little culture in Bruges before we meet up with them. So far, so good, on this trip. Hopefully it continues that way.

All of my new parts came 2 weeks early (thanks Cobb!), so I decided that this weekend I'd get…