After our two bonus days in Iceland, we departed Keflavik around 3:30 PM GMT for Boston, and got back at 5:30 EDT. It feels like it's about 10 PM right now, but our internal clocks are so screwed up due to staying up too late, time zone differences, etc, that it doesn't really matter. We were SUPER PUMPED to see the cat, and she was absolutely thrilled to see us! I think she was a little more excited than usual, though it's hard to tell with her, since she resorted to her "you're home from work! FOOD NOW" behavior that she usually exhibits. Amanda was super nice to take care of her, and has even offered to take care of her the next few days, since we're flying to New Orleans tomorrow night. Hopefully we'll get to return the favor, one way or another.

For the last two days of our trip, we decided to do the standard Iceland tourist stuff, sticking around Reykjavik. You've probably heard the term "Golden Circle", which is a bunch of stuff around Reykjavik that is super touristy. I'm pretty sure it's called the Golden Circle because you'd have to be in your "golden" years to think that it's better than the rest of the country, or even US National Parks, because man was it underwhelming. We were probably biased, because we drove through the rest of the country and saw such incredible things, but still. Katie actually looked it up, and it's actually just a marketing term, probably thought up by some tourism board. If you do visit Iceland, plan on spending like half a day doing it, just so you can say you can. There are a couple of cool places, which we got nice pictures of, but for the most part it's a wash.

One highlight on the Gilded Ring route was the eponymous "Geysir", which is what, you know, Geysers are named after. We saw a lot of active geothermal areas in Iceland, but this was probably the largest. Geysir has obviously been a tourist attraction for a long time, and there's a giant gift shop, food court, etc there. Perfect for the many, many Grey Line tour buses that we only saw on the Golden Circle route. The first Geysir was dead (long live Geysir), but a second one was apparently still going, and erupted every 6-8 minutes. When we got there, we waited around for it to start, until finally there was like a small spurt of water. After immediately declaring THIS IS BULLSHIT we walked like 200 feet away to another boiling death pool when behind us we heard a noise and saw Geysir shoot like a hundred feet into the air, with a lot of steam. So, of course, we went back to it and waited for it to erupt again, up close. Eventually it did, and we weren't disappointed.

We also saw a couple other things on the stop, like a big National Park that was a lake and some rocks, and the famous Blue Lagoon. Both were, well, crap. The National Park was probably super cool if you were A) a Scuba Diver, B) an old person, or C) you hadn't seen the rest of Iceland. Apparently you can scuba dive there to see a continental rift, even in the freezing cold. Instead, while stopping at a small mall to use the bathroom, we got to stand on the same rift inside the mall, for free, without having to scuba dive. Mall continental rift for the win. We went to one of the black beaches, and walked on the rocks, but it wasn't way more impressive than any other beach. The Blue Lagoon was a piece of crap. It's essentially the waste runoff pool from a geothermal power plant, and the water is blue colored from silicates dissolved in it. The awesome waterfalls we saw the second day were more impressive, and the same color. The Lagoon itself was just packed with sweaty tourists, and we didn't want to pay to swim. We booked it out of there pretty fast.

That night, it was super clear, and we decided to stay up so we could see the Northern Lights! We drove way outside the city, about an hour, to a remote hill on one of the fjords to minimize light pollution. The Northern Lights are actually pretty spectacular, more than I expected. I tried to capture some photos on my camera, and had marginal success. I'm getting a little bit better at knowing what I'm doing with regards to exposure, etc, to get good shots but night shooting just isn't something I've done before. So it wasn't great, but I learned a lot, so that's something! It didn't help that I didn't have a tripod, and it dropped below freezing while we were out looking. 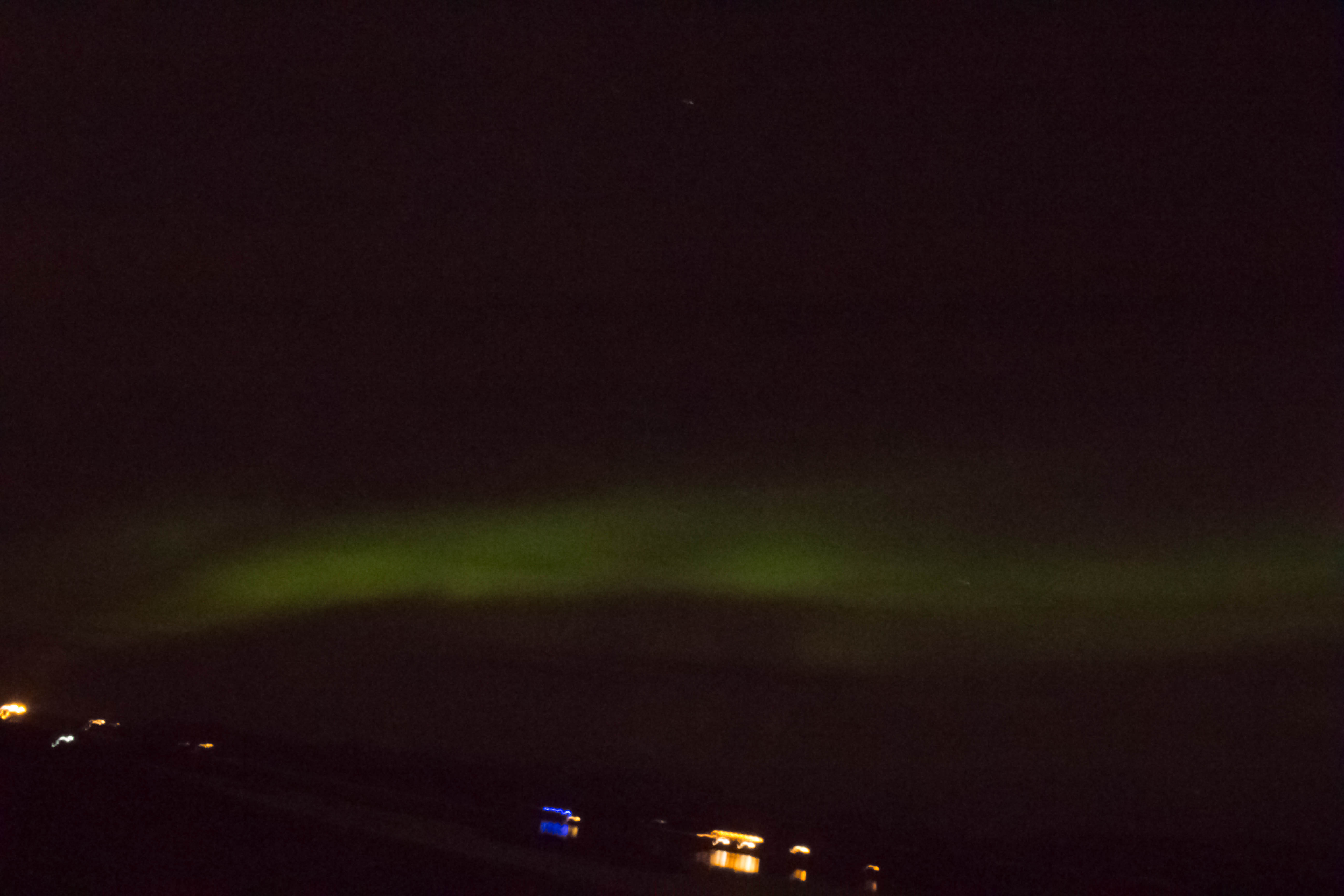 It looked cooler in person...

The last day, we decided to stick around Reykjavik, and actually see the city while it wasn't raining. It's actually pretty nice! Everything is very expensive, especially the food, but there's a lot of cool cultural sites to visit. We went to the national museum, and learned about Iceland's history. It's so frustrating to see things like "in 1000 A.D. we had a functioning, quasi-democratic society but then the Catholics came and held us back for centuries". Norway, and then the Danish, took turns holding back the Icelandic economy and culture, essentially imposing trade monopolies that prevented any kind of real industrialization until the 20th century, and even then it was slow going. It makes it all the more impressive when you consider what they've been able to accomplish in what's essentially 80 years! That night, we decided to finish off the two fifths of liquor we'd failed to drink, and get takeout fish and chips, and watch Mythbusters. It was a good way to end the trip, even if we were super hungover this morning.

I'd definitely recommend Iceland as a trip, but only if you're willing to take the time to rent an SUV and explore North and West of Reykjavik. Be prepared to put in a lot of driving, and spend a lot more money than you expect to. Also be prepared for pretty hazardous/scary driving, and if you're not someone who can deal with that sort of thing, maybe hire a tour company to do it for you! We're definitely glad to be back in the states, but we're definitely going to miss Iceland a bit. I'd love to go back someday in the middle of summer, when it's a bit more green, and enjoy some of the rafting and hiking activities that aren't really possible in the winter. Our next stop is New Orleans, and while I wish I had a bit more downtime in between trips, I'm still looking forward to it. Just planning on not traveling for at least a few months once we're done with this series of trips.

In case there was any chance we were mistaken, today it's definitely Spring In New England. Cloudy, rainy, miserable,…

It's Pretty When The Sun Comes Out

Katie and I drove back to Reykjavik today, about a 9 hour trip. Normally it'd take about 5 hours,…