In case there was any chance we were mistaken, today it's definitely Spring In New England. Cloudy, rainy, miserable, and everything looks dead! 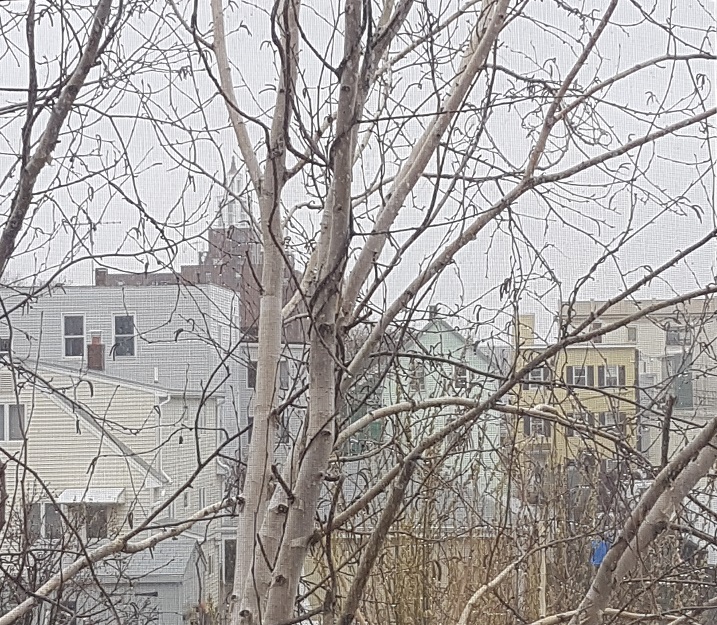 Still, it is great to be back. We've been away since the 23rd of March (with a brief 24ish hour stopover here), and we're exhausted. The cat is absolutely ecstatic that we're back, and she won't leave me alone. Yesterday/last night, we had to put up with endless meowing and running around, which has now given way to her just sitting next to me on the desk and occasionally grabbing my hands so I'll scratch her. It's a pretty OK deal, given that by the end of the trip Katie and I were both like "WE MISS THE CAT OH MY GOD SHE IS GOING TO BE SO MAD AT US". Based on the hour plus of excited kneading my legs got this morning before I woke up, I don't think the cat hates us yet, though. Maybe after our next trip, in 2032. 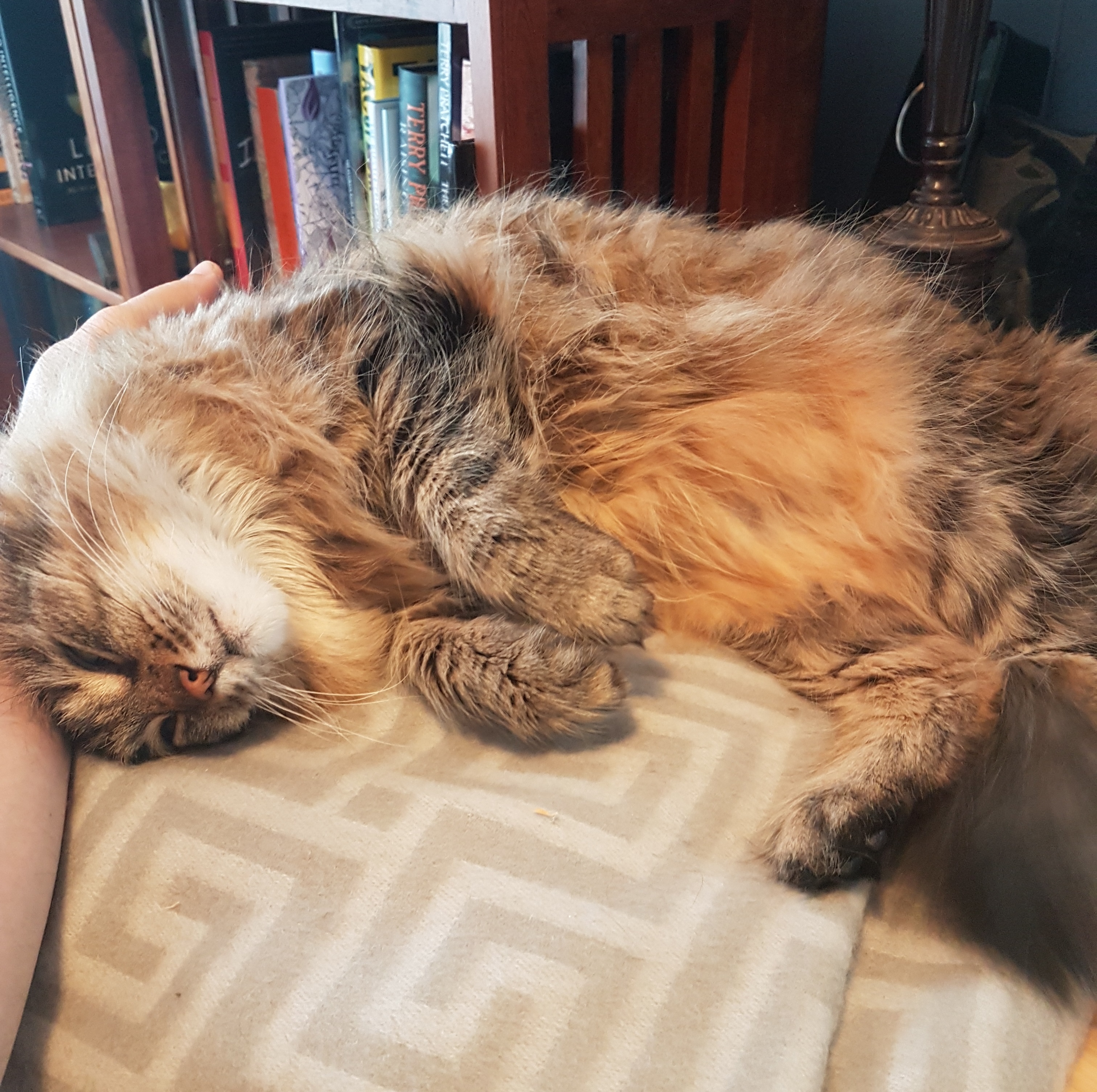 The last 3 days in New Orleans were a phenomenal choice, despite our exhaustion from Iceland and traveling so much. We stayed with two other couples in an Airbnb in New Orleans, a mile or two from downtown. Apparently the house we were in was built in 2010 by Tulane architecture students, in the middle of an admittedly not so great (but seemingly up and coming, based on the amount of construction) neighborhood in New Orleans. The woman who owns the house is a "professional organizer", a thing that I'm still not really convinced is actually a job. She definitely did a good job decorating her house though, there were knick knacks everywhere, and she even left muffins on the table for our arrival! We took cabs/Lyft to/from the house most days, since it's not really safe to walk there at night. The one exception was the last night we were there, when people insisted that we walk, since the rideshare would take a long time to get to the restaurant. Really surprised that we didn't get mugged.

We took a bike tour on our first day in New Orleans, so we could learn some of the history and see some sites that we couldn't have walked to otherwise. We were led by Danny, a guide for Bullfrog Bike Tours, and he was fantastic. He was one of those guys who just speaks with knowledge and enthusiasm about pretty much everything, and seemed to know everyone in the city. Despite a couple of hiccups, including one rider having two blown tires on the same bike, we saw some awesome architecture and locations. I'll admit, most of the time I was distracted by how green everything is. New Orleans now is just like New England in the summer, and it made me realize just how badly I want the stupid cold to go away. My favorite thing I learned on the tour was how New Orleans water/drainage system essentially doesn't work, and is the original system from when they first built the low lying areas of the city. Maybe a good idea to spend some money on some upgrades, Louisiana. Probably easier to convince your current governor that it's not a communist plot to have good infrastructure, so that your water isn't poison.

That whole "you can walk around with a drink in your hand" thing isn't just on the famous streets, it is everywhere in New Orleans. You're in like a nice restaurant, and you can can ask for a "go cup", and all of a sudden you're walking around with a big frozen cocktail, or beer, or literally just straight whiskey, in your hand. Almost all of the happy hour deals are for the really sugary, diabetes-in-a-glass kind of cocktails, which is sort of a bummer, but didn't stop me from drinking a ton of them and feeling really sick that first day. Overall though, the quality of the drinks was really, really good. Not to mention the food, which was phenomenal. We ate a ton of seafood, and fancy giant hotdogs, and Po' Boys, and really what I'm trying to say is we spent/ate way too much. I don't regret it at all though. Some highlights included Butcher, Dat Dog, Superior Seafood, and SoBou (where we watched a "Legs and Eggs" burlesque show while eating brunch). 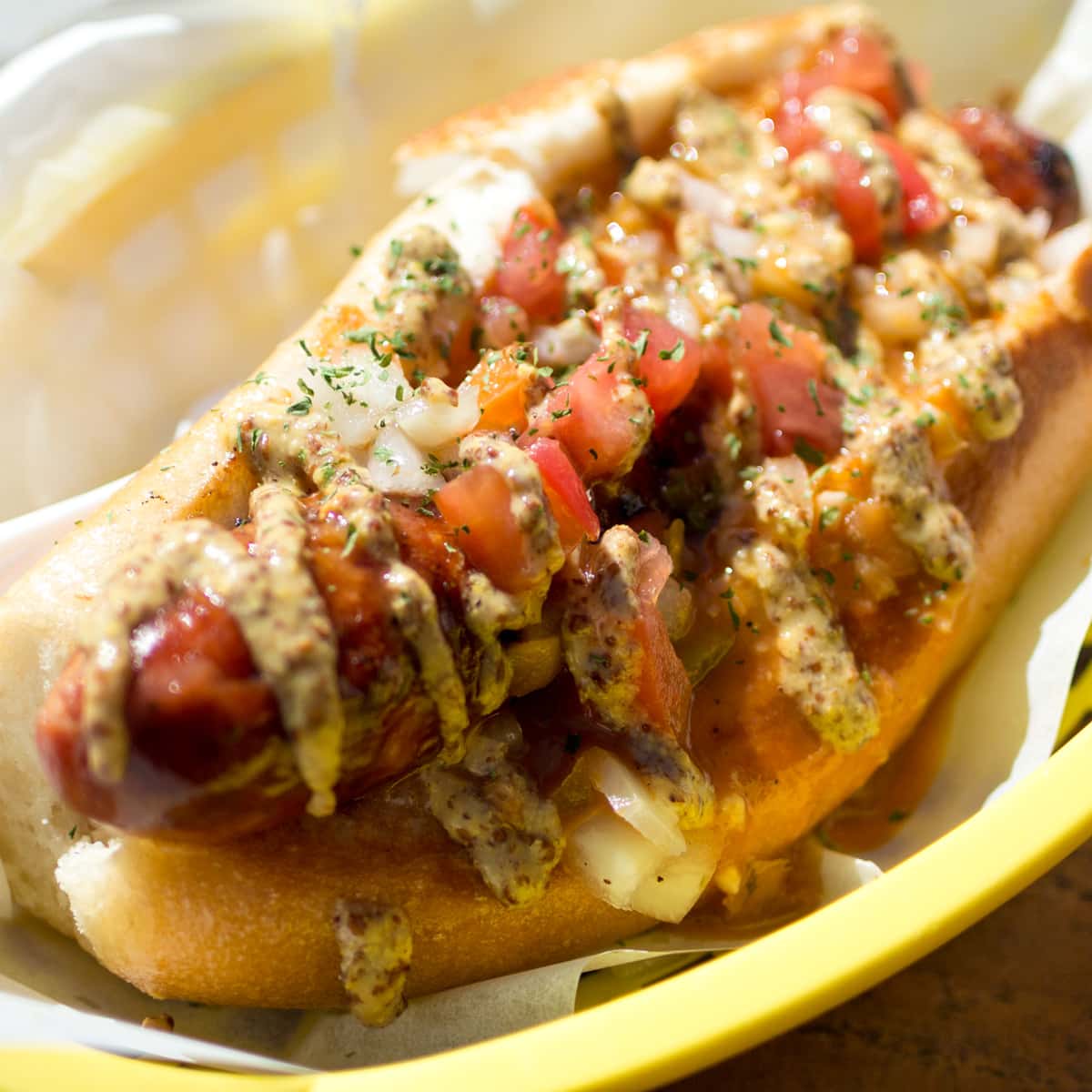 The Crawfish Etouffee dog did not disappoint

Friday night, we went to Bourbon Street, and holy cow what a horrible place. Imagine the worst college bar you've ever been to, like Kam's, where the floors are sticky and everything smells like urine and vomit. Now, imagine that a street, outside, is like that, and you have Bourbon Street. I thought maybe it was the worst thing ever because it was Friday night, but we went back during the day on Saturday (briefly), and it was exactly the same. Don't go to Bourbon Street. Go literally anywhere else. The food, drinks, people, and atmosphere will be better. On Sunday we went to the Bulls/Pelicans game, and even though I cared nothing about the game, all I could think about was how much better it was than being on Bourbon Street again.

I'd probably go back to New Orleans, though I think it's more of a "Fly in Saturday Morning, Fly out Sunday Evening" sort of trip. The history tour was worth it, and I think I would have liked to take a ferry ride if I had more time. I also wish I had taken some pictures, but I kept forgetting my camera at home, which was probably for the best given the amount of drinking we did. I'm definitely looking forward to a long stretch of being at home/trips I can drive to, though. Finally should have the time to do a lot of the chores I've been pushing off, like my taxes. Keep forgetting to actually do those, and I only have a few days left.

The Sun Is Great

Winters are generally a pretty tough time for me, and this last one was no exception. I really love…

All Good Trips Must End

After our two bonus days in Iceland, we departed Keflavik around 3:30 PM GMT for Boston, and got…