After being delayed by having to replace all of the lug nuts, I started the job on Saturday morning. I decided to start with the rear brakes, for two reasons: they're less important on my front-wheel drive car, and they were in worse shape. After getting the thing up on the jack stands, I removed both rear tires, and disassembled one brake. Turns out this is more or less straightforward, though I took a long time because I was both trying to internalize what I was doing, and trying not to break anything. 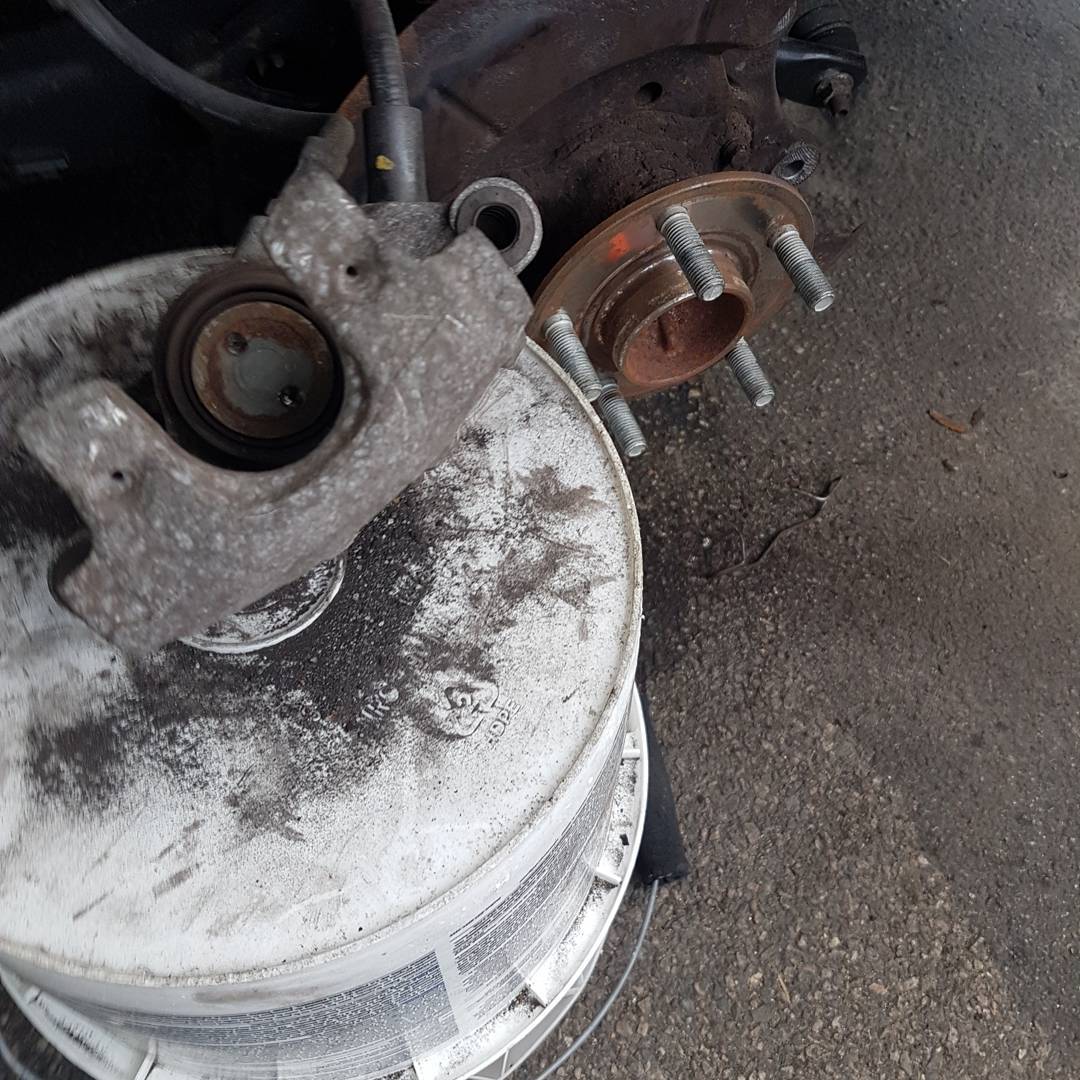 Only took me like an hour and a half to get here...

I disassembled the brakes one at a time, so I'd have a guide to look at when it came time to reassemble them. The most time consuming thing, easily, was cleaning the damn calipers. Now, I had intended on cleaning them so I could paint them. However, once I had the things apart, I decided not to paint them for two reasons: Time, and I think I'm going to replace the calipers and lines in the Spring. So I just cleaned the crap out of them with a wire brush and brake cleaner. There was so much dust on there, it took forever. Once the caliper was clean enough, I mounted the new rotor, then the caliper, then greased the pads and pins, then wrenched everything back together. It was so... shiny. And great. And terrifying, since I was convinced I'd done it wrong, and I was going to fly into an embankment on 93 when my wheels came off and my brakes didn't work. 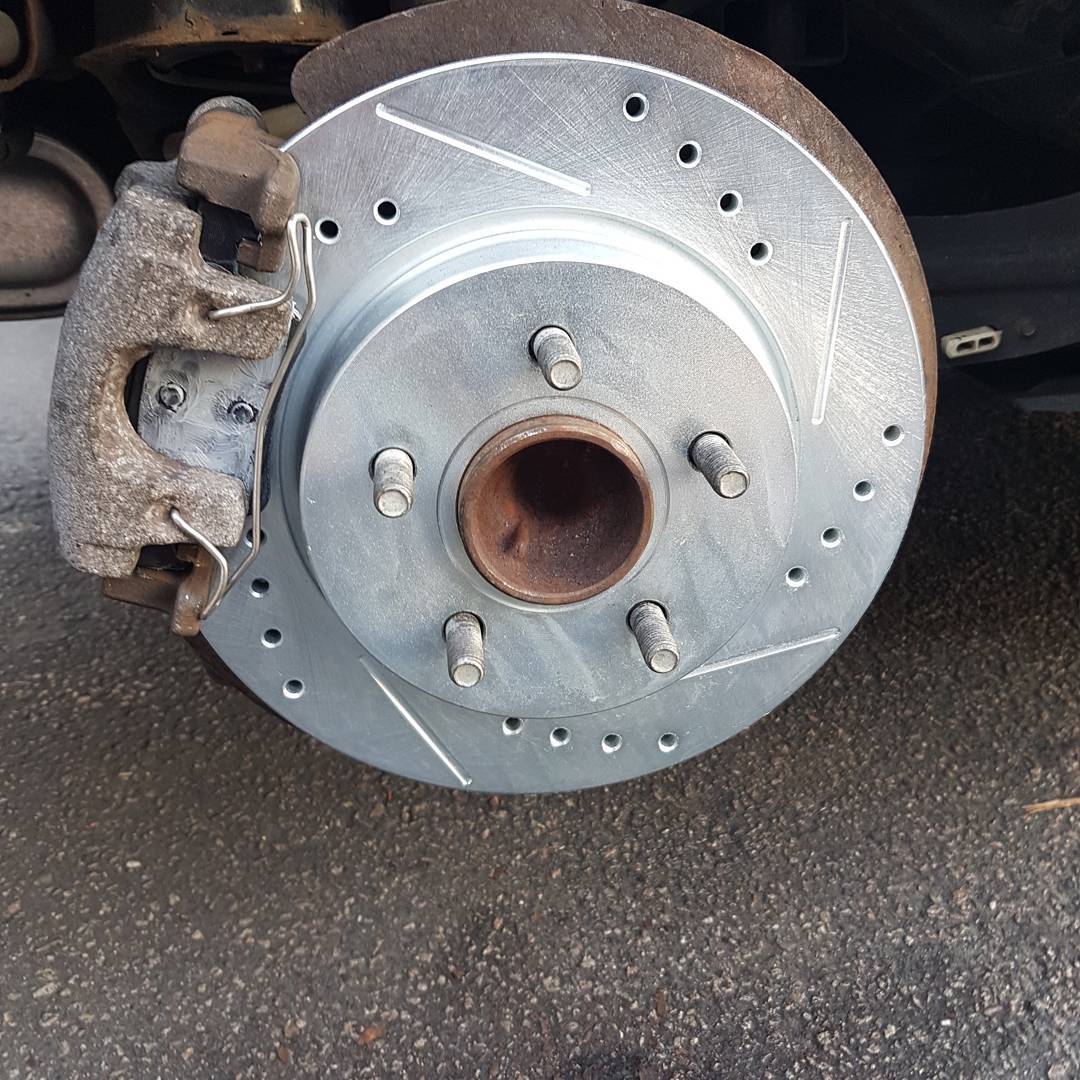 Nicer, right? Once I'd done the other ones, I put the tires back on, torqued down the nuts, then took the car out to break in the pads and rotors. This isn't something I knew needed to be done, but the kit said I needed to in order to avoid noise and rotors warping. Seems like it's only necessary on some pads/rotors, on heavy and high performance vehicles. Anyway it involved accelerating then braking hard like 10 times, then driving around for a while without using my brakes. Thank god I have the stick now, because I have no idea how I would have managed it in an automatic.

I ran out of daylight, and it rained all day Sunday, so I let the car sit, then did the front brakes this morning. This was way easier. The fronts didn't have the screw-in pistons, I could just use a c-clamp. The only complication was that the pads were glued on the front, and they were stuck hard with brake dust buildup. Other than that, though, smooth sailing, and the job went a bit quicker. I reassembled everything, bedded the rotors, and then ended up taking the car out to Shrewsbury to see my parents. No issues. Pretty happy I was able to get this done without great incident, and I love the new brakes. They feel awesome, there's no more noise, and I don't have as much stupid dust.

Saved me a bunch of money, too

Did everything go exactly according to plan? Well, no. I didn't paint the things, like I said. I also destroyed the powder coat on one of my rims because I got brake cleaner on it when cleaning the wheel. Didn't know that brake cleaner would take off powder coat, whoops. I already had a messed up rim due to road rash, so I'll just bring it to someone and get them refinished/repainted. I also accidentally put one of the calipers on and tightened it down with the brake line twisted, so I had to take it off and put it on again. Other than that, went pretty smooth! I used various online guides on how to do this (of varying quality), but I wrote my own guide that I'll use next time. Help to avoid the ambiguity that the internet is so fond of providing.

I know it seems like sort of a minor job, but I feel pretty accomplished knowing that I did a job slightly more complicated than the level of a basic oil change. Gives me a lot of confidence that I'll be able to do the other modifications I want to do, like a new exhaust. The funniest part of the whole thing was that it seemed like half the neighborhood managed to make their way over to watch. Old men came by and said things like "doing brakes, eh? Back in my day you could just go to the shop and get your rotors turned, not anymore." Children across the street asked their dad "why is that man taking apart his car" and kept running over, scaring the crap out of me that they'd die underneath the car and I'd go to prison. People my age came by and were all "oh, you must know a lot about cars", which is a blatant falsehood, but still felt nice to hear. I guess in Somerville there's not a lot of room to work on cars, so most of them probably never see anyone doing anything outside of a shop. Guess I'll just have to keep them entertained.

Farm Shares Are A Mixed Bag

Both literally and figuratively. If you don't know what a farm share is, it's a way of prepaying for…

So I Actually Did Work On My Car Today