It's been a while since my last post! I think I've actually spent more time doing maintenance/moving this blog off of AWS and onto DigitalOcean than I have spent writing the last few months. Oh well. Doesn't mean I haven't been doing stuff, though. Aside from planning Wedding 2.0 and trying to prevent myself from going crazy, I continue to dump money and time into the Focus ST. It's cathartic! I've done a couple of projects in the last couple of months, two performance-related, and one cosmetic. Let's start with the cosmetic. 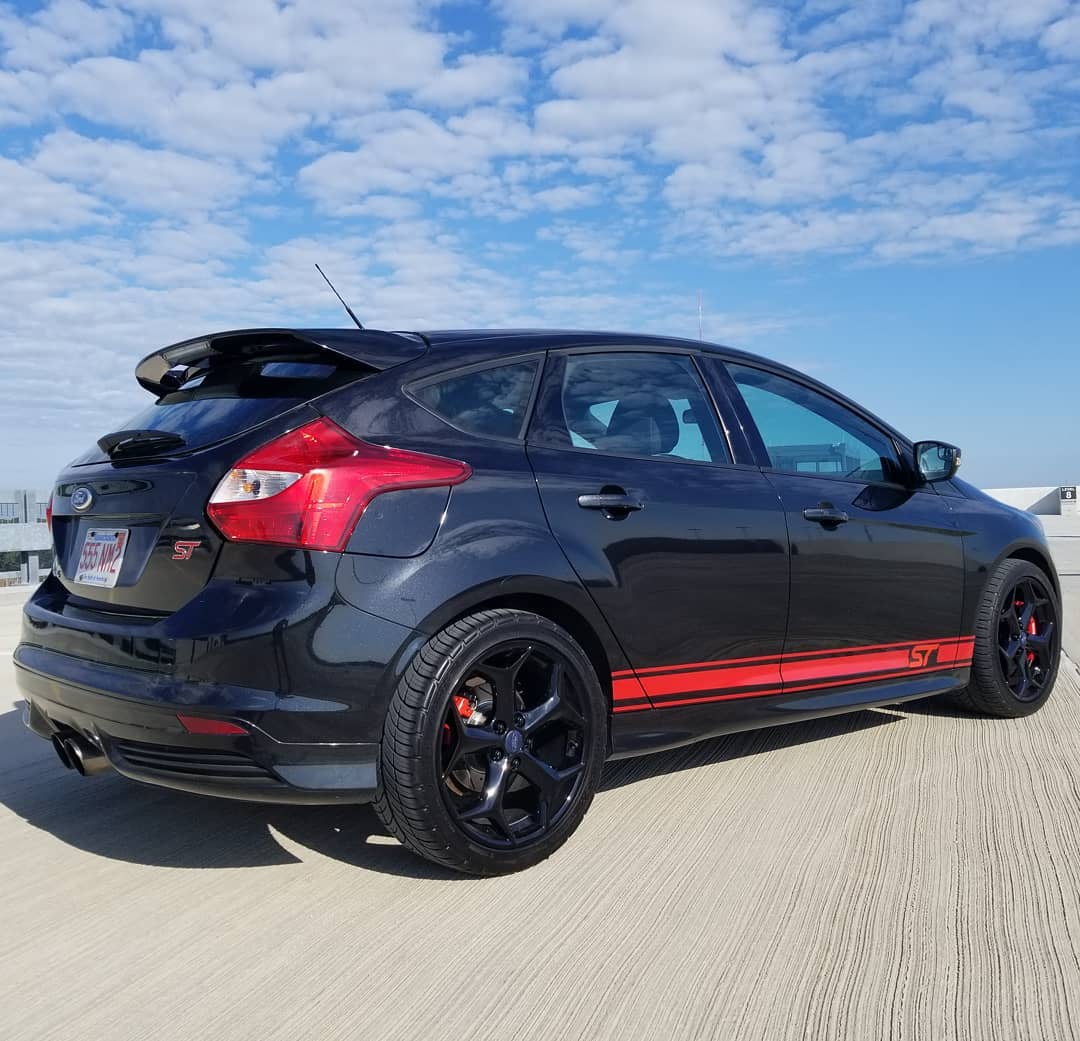 I got the paint polished and touched up, the rims refinished and painted gloss black, and I added some striping! Admittedly, the striping isn't quite as aggressive as I first envisioned, but Katie expressed some reservations, so I dialed it down a bit. I think it looks really sweet with the red calipers though, and it's subtle enough to look like OEM side stripes from the 80's/90's, which I think is a cool throwback. I'm very pleased with the look of the gloss black rims vs the gray that was on the car before, it looks much more better. Along with the paint polishing, I think the car looks 100 times better than before. While I was having that done, I also had the shop try and fix the rear bumper/hatch, since they were hitting together, the paint was coming off, it was rusting... ugh. This car has been in at least one accident prior to my owning it, and sometimes it shows. Oh well.

As soon as I got the car back, I had other work to do. I've modified the Focus quite a bit, and I'm running it with engine/boost parameters that are a lot more aggressive than stock. I'm preparing myself for various kinds of failures down the road, and I did a little research on modifications/maintenance that could help preserve the life of the engine. One of my biggest gripes with the aftermarket community is that it's incredibly difficult to tell which modifications actually do something from the ones that are worthless. And like 85% of what's out there is worthless, unless you're running a very specialized setup, and even then, some are totally bullshit, like this garbage. One modification I decided to install is a PCV Oil Catch Can. On the forums I frequently lurk in, whether or not it does anything is something people fight holy wars over. 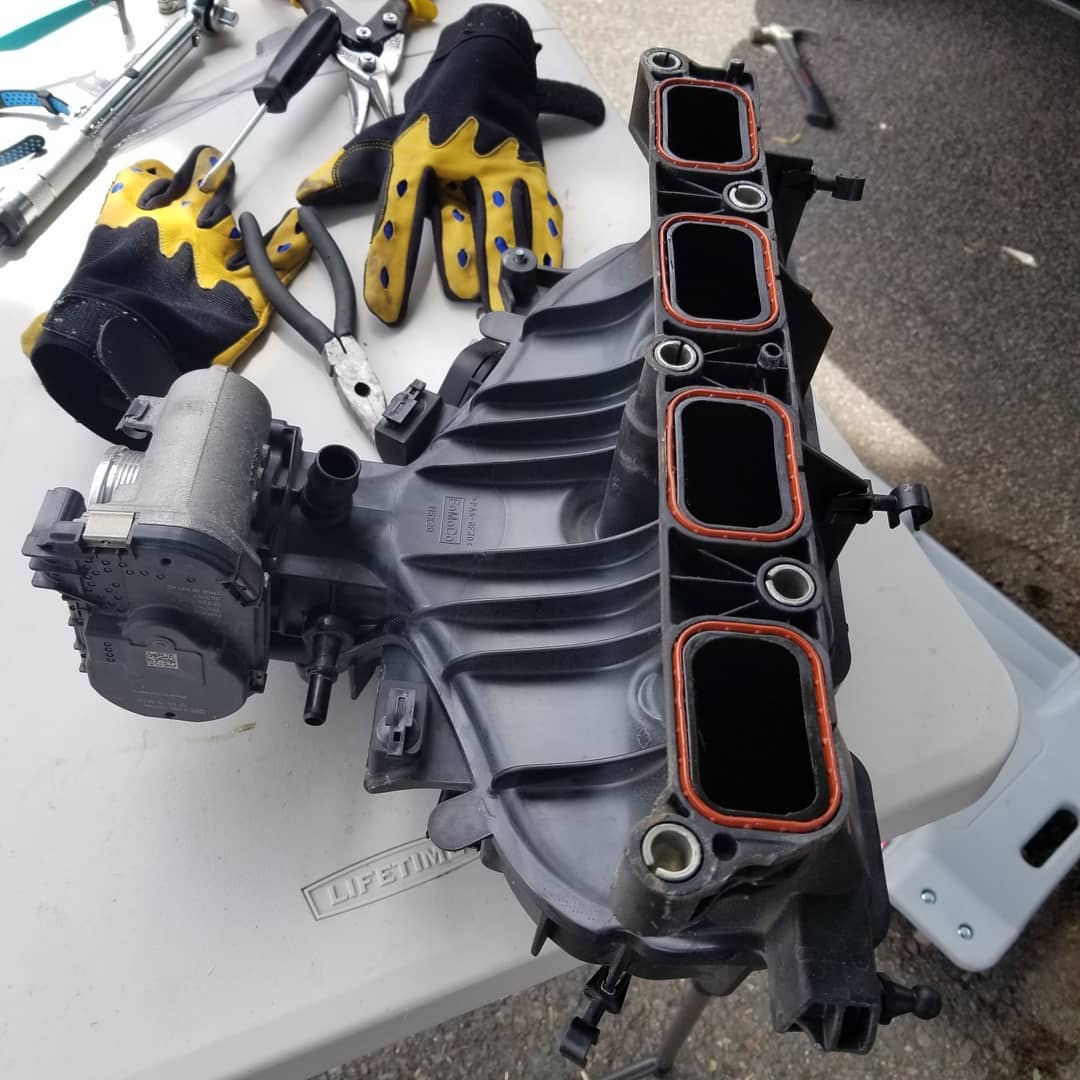 Removing the throttle body and intake manifold to install it was a pain, so it better do something

Why is this such a controversial modification? Well, because it might do something, but it might not! Probably best to just explain what it does. Your Positive Crankcase Ventilation system exists so that blow-by gases (that leak by your piston rings into the crankcase) don't build up inside your engine and cause damage. Originally, these gases just got vented from the crankcase to the atmosphere, which is horrible for the environment. So, PCV systems were developed in WWII, which recirculate the blow-by gases back into the intake, so they can be burned as part of the combustion cycle. Sounds great! The problem is, these gases that you don't want turning into sludge in your crankcase, are now building up on your throttle body, intake manifold, and valves. On a direct injection engine you're always going to get some buildup, but PCV makes it worse. Supposedly. That's why you install a PCV Oil Catch Can. It's essentially a filter for the PCV system that traps oil, water, and other gross crap, and then you empty it every couple thousand miles. Does it do anything? Maybe! It certainly does trap stuff. While I had the intake manifold and throttle body off, I cleaned them, and then installed the catch can. I also checked out the condition of the valves, which were grody, but not enough to impede airflow. So, we'll see I guess. I'm going to change the oil for the first time since installation on Saturday, and we'll see what it caught.

The far, far more exciting modification I made was getting the car dyno tuned last week. I've been running a Cobb Stage II 93 Octane off-the-shelf tune for a while now, with pretty good results! However, I had no way of i) confirming Cobb's numbers and ii) the tune definitely wasn't the best one for my car. It was a little too rumbly, and power delivery was improved, but not as consistent as I liked. So, I decided to bring my car to BrenTuning in Upton, MA, a specialty modification and tuning shop. For $600 and a couple hours of time, they said they'd be able to get much better gains suited for my car. The OTS maps are ok, but conservative, and the numbers are dialed in for a wide range of climates/modifications/mileages/etc. 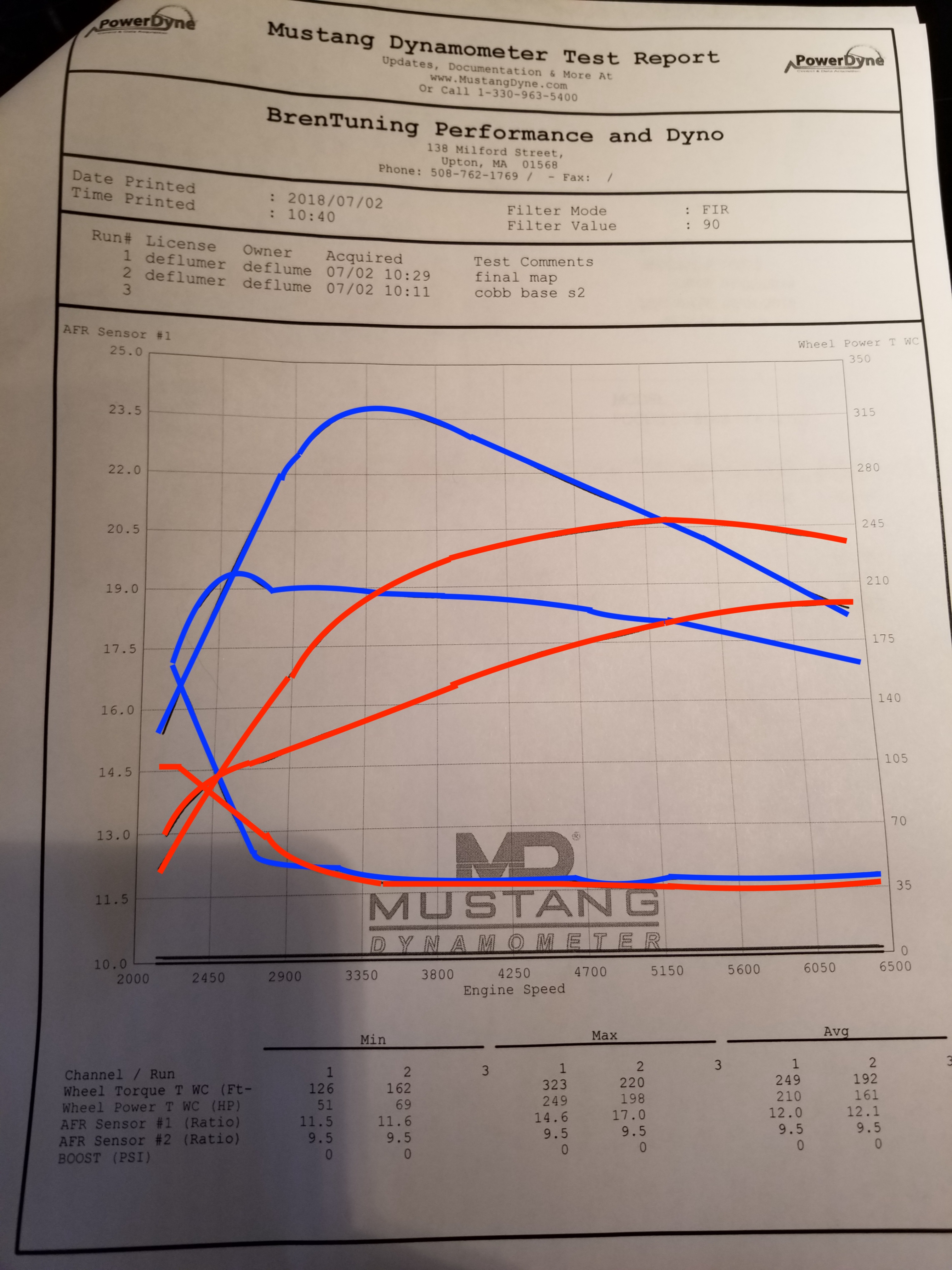 Dyno tuning is essentially putting your car on a large, car-sized treadmill, hooking it up to a computer, and then a professional tuner reads out values, and uses them to program new values in. The results I got from the dyno tune are crazy!

That's nuts! The stock HP for the Focus ST, measured at the crank (not the wheels), is 252 HP. HP/Torque at the crank is generally higher, due to parasitic losses in the powertrain. So, my 5 year old car is now registering 249 HP at the wheels. A hand-wavy sort of conversion (WHP * 1.25) gives me 311 HP at the crank. That puts my Ford Focus in Mustang/Camaro territory. Not to mention the torque, which is hilarious. You honestly can't really trust these numbers since every dyno is different, but just looking at the gains is super awesome. I had the shop enable a custom traction control from Cobb that should help me deliver all that power to the ground, instead of spinning the wheels. Working pretty good so far. As an added bonus, because the shop dialed in the tune, the car idles and runs much smoother. Less vibration when running the AC compressor, and less rumbling when engine braking.

We're having a car show at TripAdvisor HQ next Thursday, and I'm excited to see what people bring. My Focus won't be the most powerful and impressive car there, but I'm still excited to talk to other car people and see what kind of awesome machines they've worked on. The next project up for the Focus is trying to mount my second set of rims. I'm either going to have to install shorter wheel studs, or I'm going to have to cut the stock ones. Either one is fraught with peril, not in the safety sense, but in the "I don't want to make it so I can't get the wheels on the car" sense. Luckily, I have a shop I'm working with, and I think we'll be able to find a solution next week.

I've always run all-season tires, since I never really cared about getting peak performance, and the cars I've owned have generally been AWD and low torque, so they performed well enough during the winter. That wasn't the case with my current tires, though.…

A Wedding And Detailing My Car

Katie and I wrapped up the second weekend in a row where we attended a wedding. The wedding was…