After arriving in Siglufjörður last night around 9:30, eating dinner, and going to bed, we were looking forward to a day of doing basically nothing. That plan actually went pretty well! Katie got up first, around 10:30 AM, and I heard her gasp when she opened the curtains to our room. The view is incredible. Turns out that when it's not a blinding rainstorm, we're surrounded on all sides by icy water and gorgeous mountains. It was a hell of a way to get up on a Saturday, and made us eager to get out and explore a bit. 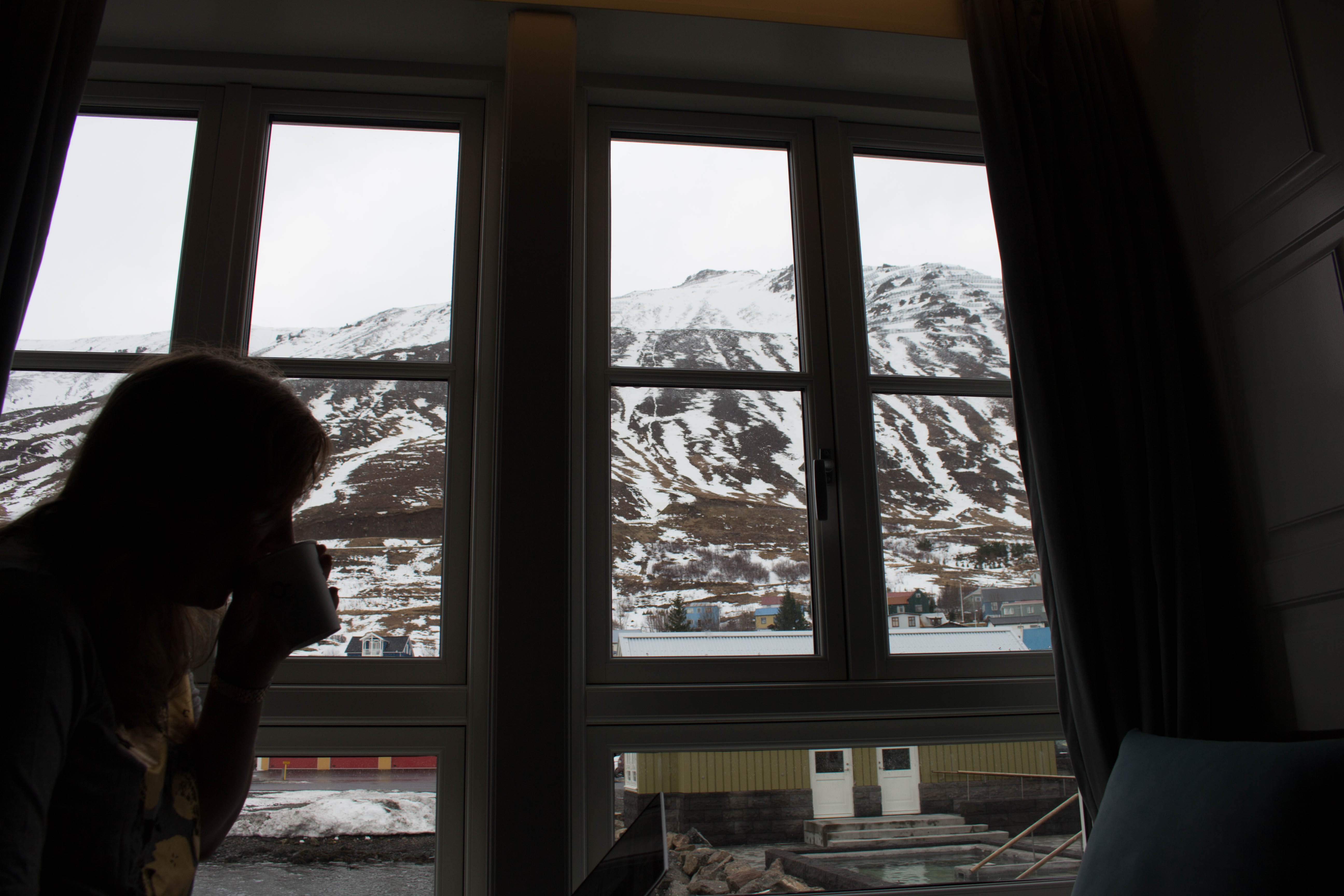 Unfortunately, we slept too late to grab breakfast, which Katie saw them putting away when she snuck out to grab coffee. Apparently it looks awesome, so we'll grab it tomorrow before we leave. There are actually a fair number of people here! There are a few international tourists, obviously, but what's surprised me is the number of Icelanders here on vacation and doing touristy things! I guess I never considered that the people who live here would take vacations here because it's so small. Katie pointed out that it's really no different than us taking a vacation in Maine, or New York, which is fair.

We started the day by taking a walk along the harbor, and taking in the surroundings. It really is breathtaking. We're still dealing with cruddy weather, but honestly it hasn't really dampened our enthusiasm. Along the water, we saw the Herring Era Museum (which we'd visit later), and took in the local architecture, which is interesting. The houses are very small, and are many different colors, manufactured out of a variety of materials (wood, metal, concrete, stucco). It's clear that this former industrial town is going hard on trying to pull in more of the tourism trade that has been such a boon to Iceland the last 10 years. Honestly, it's a great move, and there's a ton to recommend here. It's beautiful, and I love it.

After walking a bit, we realized that it was 1 PM, we hadn't eaten lunch, and were getting a bit crabby. We had a map that showed us all the restaurants in town, and decided on Kaffi Rauðka, which is right next to (and likely also owned by) the hotel. The menu was full of stuff like paninis and ribs, but I decided on a salad w/ shrimp and eggs, while Katie decided to get Icelandic Fish Stew. Holy cow that fish stew was great, baked, covered in cheese, and served with what tasted like B&M brown bread. We were the only ones in the restaurant, until another couple came in right when we were leaving. We'd see them again later in the day. We stopped back at the hotel to make a dinner reservation, since it's our 2 year anniversary, and then weighed our options for what to do next. I slightly regretted my choice

We decided to go outside again, and try and find the Herring Era Museum. We noticed what looked like a large tour group, so we booked it over to what we thought was the museum, only to find it locked. We walked two buildings down to find a different door with lights on, and walked in to find an Icelandic woman and her young daughter. She asked if we were with the tour, and we said no, and she explained that usually they were only open by appointment. However, we were in luck, since they were open for the tour group! As long as we were fine with a self guided tour (since, you know, the tour group was guided/speaking only Icelandic!), we were welcome to follow along until the end, when we could pay. Since the exhibits were in both English and Icelandic (and other languages), we took in the museum. It was a pretty awesome museum, as far as museums go, and we understood why it had won so many awards in Iceland and the EU. We also ran into the other couple, who we introduced ourselves too and learned were Calvin and Carmen from the Bay Area in California. We talked a bit about Iceland, turns out they've been driving the whole ring road (the circumference of Iceland). If we had more vacation time, I'd have loved to do the same, but probably in the summer.

The first building was where the "Herring Girls" lived, the women who cleaned and packed the the herring in salt on the docks. The next was the factory where the herring was boiled and processed into oil and fish meal. This was a cool building, with tons of original equipment, a lot of it manufactured in the United States, which was cool. The "please read instructions before installing" plaque on the giant generator was a highlight for me. We learned about the boom/bust cycle of herring, which occurred over and over due to overfishing and seasonality which affected herring populations negatively. It really was an incredibly lucrative trade. It was used mostly for the meal and oil, the meal being fed to animals since it's full of nutrients, and the oil used to make all kinds of products. The final building was called "the boathouse", and was a faithful indoor recreation of what the docks looked like at the time, complete with two boats that you could climb all over and go inside! It must be awesome to go here on a field trip as a kid, I know that some people get to, a prep school in Connecticut was apparently here last week.

Afterwards, we went back to the hotel, where Katie insisted that we go in the outdoor hot tub, which may/may not be geothermal, we're not sure. We got drinks at the bar, which was hilarious, because the concierge had to get them and I'm pretty sure he's never had a drink before in his life. He struggled to pour Katie a beer, and when I asked for scotch, he had no idea what I was talking about. After pointing out the Lagavulin 16 on the shelf, he proceeded to pour me three shots, spilling a lot. I have no idea how much it cost. We proceeded in our robes/slippers to the changing room, where we showered, and entered the tub. It is freezing cold, and sleeting, and we're sitting in steaming water drinking scotch, surrounded by beautiful snow covered mountains. It was one of the more surreal and awesome experiences I've ever had. Also made it clear why hot tubs are great, they're clearly for the cold. Why they have them in warm weather climates is something I'll never figure out.

We've now retired back to the hotel room to relax, and get ready for dinner. We're watching some Icelandic bros (like 40 year old bros) get drunk and jump off the fishing boat outside our room and jump into the freezing ocean. They're doing some kind of drinking chants and singing, and it's hilarious, even though we can't understand anything they're saying since it's in Icelandic. Our dinner reservations are at 7:30, and we'll probably spend a bit more money tonight, trying some appetizers/desserts in addition to our main courses. If it's anything like last night, the food is going to be awesome. Siglufjörður is an awesome place to visit, and I hope that it becomes a destination on par with Reykjavik. I know that we'll definitely tell anyone considering a trip to Iceland that it's definitely worth the drive. Tomorrow, we head back to southern Iceland, but I know that I'll never forget being here.

It's Pretty When The Sun Comes Out

Katie and I drove back to Reykjavik today, about a 9 hour trip. Normally it'd take about 5 hours,…

Today We Went Inside A Glacier

Day 2 in Iceland, in many ways our first full day, started off with us getting lost in the…