Day 2 in Iceland, in many ways our first full day, started off with us getting lost in the rush hour Reykjavik traffic. We spent Thursday sleeping and kicking around town, and were ready to start our real vacation. Katie booked a tour called "Into The Glacier", where you got to do right what it said on the box, go into a glacier. It was a two hour or so drive north, so after checking with the front desk to make sure that we wouldn't die in a horrific windstorm, we left the Hilton at around 7:45 AM, sure that we'd get there in time for the tour to start. The getting in traffic thing was only the first of a series of misadventures on this fun, yet terrifying, Friday in Iceland.

We were smart, and rented a GPS from the car rental company, because we thought "hey, we don't know where we're going, let's just trust navigational satellites". Turns out that the GPS is another piece of garbage, and thinks that roads that are roads don't exist, and roads that aren't roads clearly do. Did I mention that most roads in Iceland are gravel, with the exception of the main highway? You have to consult a special map that shows you where roads are passable/impassable, and make a determination on route based on that. After trying one road that ended up going into a raging river, we doubled back to the highway, and ended up 5 minutes late for the tour start. At this point, I'm anxious and grumpy that we're late, but hey, we get on the giant 8 wheeled truck and listen to Thor (seriously his name) tell us about how we're going to venture into the Highlands, the land of outlaws, goblins, and elves. It's a barren snow desert, and we can't see 5 feet out the window. Exciting!

We arrive at a large section of corrugated pipe sticking out of the ground, and start descending into the cave. Apparently these man-made tunnels, bored in 2014, are the largest man-made ice caves in the world. They descend 40 meters under the glacier, in its most stable part. Katie is thrilled to be wearing a snowmobile suit, and I'm excited not to be cramped on the giant truck. The cave is wicked awesome. Our tour guide for the caves, a nice Icelandic woman named "Goodie" (because her name is impossible to pronounce) leads us deep into the caves, explaining their features, showing us cool rooms bored out, even singing "Fly Me To The Moon" to demonstrate how the ice echoes deep in the cave, while the snow doesn't. There was an amazing crevasse that provides air to the tunnels, and so many beautiful things to see.

We eventually exit, and ride the giant truck (U.N. surplus, apparently) back to the start of the tour, where we eat a delicious lunch of soup and salad, prepaid by Katie when she booked the tour. We couldn't figure out what meat was in the soup, but we sincerely hope it was horse (it was probably lamb, chill out). We set out for Siglufjörður, our destination in Northern Iceland where we're staying for two nights. After one more attempt at a "shortcut", which involved trying to simply go over a mountain instead of around it, we head back to the highway and begin our long trek north. Check out the following High Tech Graphic to see where we had to go: 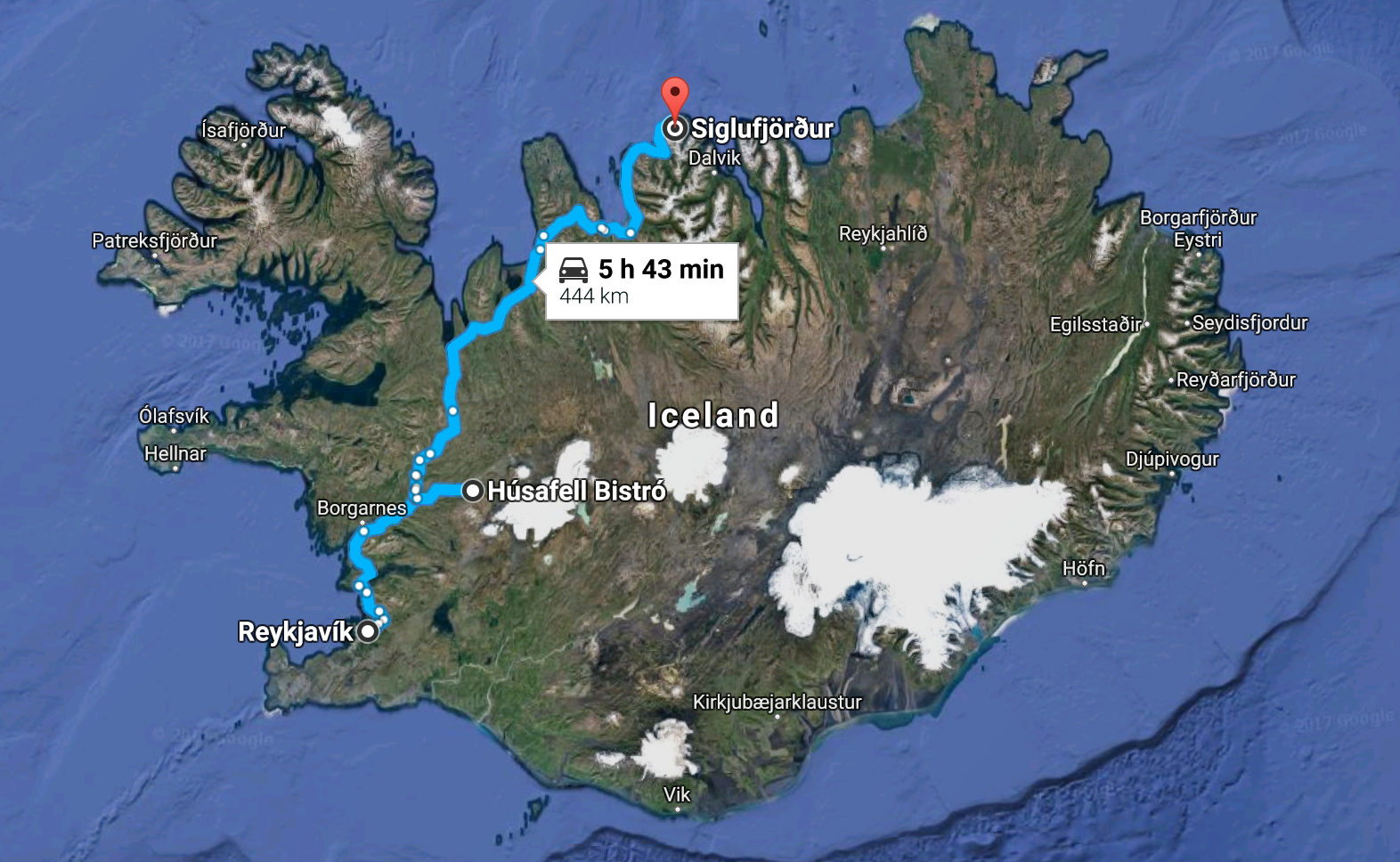 There were a couple of gorgeous waterfalls that we stopped and took pictures of. Seriously, some of the most beautiful water and landscapes I've ever seen. We had mentioned to a couple of Icelanders that we were heading north instead of South, and after realizing that we were just going to see something a bit off the beaten path, they were absolutely delighted. It became easy to see why, it's breathtaking. We saw hundreds of the famous Icelandic horses, just chilling in the freezing rain and ice. We also happened upon some sheep that got loose from their paddock, and really didn't want to stay still for a picture (we got it). Except for the wrong turns, everything was going pretty well.

The weather all day was rainy and cold, and as we went north we ended up having to go over some high plateaus that turned out to be very cold. What comes with cold? Snow! The roads were beginning to cover over, and the wind was gusting at close to 70 mph. The stupid Rav4 got blown all over the place, and completely lost traction a couple of times on a downhill, fishtailing, but I managed to keep it on the road. This is a good time to mention that Icelandic people (or just other tourists, tough to tell) drive like goddamn maniacs. We had people pass us going 70 km/hour in close to whiteout conditions. The roads were some of the slickest I've ever driven on, and I grew up driving in snowstorms in New England! Couple that with the wind, and I'm not surprised that there are so many accidents in Iceland.

We stopped one final time to go to the bathroom/get gas, and because we had to go so slow it was getting dark. We were about 100 km from Siglufjörður, so we checked the weather report one more time, and it looked like we'd be clear to get there. It turned out that they had closed the road behind us due to that snow squall I navigated through, so we could only really press forward anyway. After the white knuckle driving I'd done in the snow, I was looking forward to a leisurely drive to the hotel. We drove along a valley, passing by numerous small towns of just a few buildings, continuing to bask in the beauty of the landscape. The road was paved, which was nice, and we had a couple of snacks, hoping the hotel restaurant would still be open when we got there. Then it started to rain. Hard.

Just as it started to rain, it became extremely clear that this was not going to be a relaxing drive. It got pitch dark, and with the wipers at maximum we ascended the side of the mountains along the edge of the fjord. With my wipers on maximum, and my highbeams on, I could see for maybe 50 feet. The road alternated between gravel and pavement, and ascended at grades that are likely illegal most places. Most of the time the left side of the road was a sheer cliff, and the right side of the road was a mountain with signs warning of avalanches/falling rocks. During the day it must be breathtaking, but at night in a crappy crossover it was terrifying. Katie picked up how stressed I was, and played music and chatted, which was nice. Finally, we went through a cool one-way tunnel, and all of a sudden we were in civilization again. I look forward to driving that way again while it's sunny, but I hope to never have to drive in conditions like that again. The only way it could have been worse was with snow.

We drove along town until we got to the hotel, and were immediately impressed. It's gorgeous, only built a year ago, and immaculately kept. They were waiting for us, since I have a feeling there are few guests this time of year, something I was counting on. We were really hungry, so we grabbed dinner in the hotel restaurant 10 minutes before it closed. It was honestly some of the finest dining I've ever had, seafood better than the best restaurants in Boston. The room here is fanstastic and comfortable, and we can't wait to explore the town tomorrow. It's small, but I'm looking forward to a day of unwinding and walking. We can drive again on Sunday, this time in sunny, pleasant weather. Without worrying about falling off cliffs.

After arriving in Siglufjörður last night around 9:30, eating dinner, and going to bed, we were looking forward…

Iceland, Where Apparently It's A Hurricane

I sit here, writing this, from the lounge of the Hilton Reykjavik Nordica, a pretty nice hotel in Iceland.…