After the tremendous 8 hours that was Oktoberfest, we awoke the next day to venture out of Germany to the Czech Republic, where we’d spend the last day of our trip. Jason had returned Peugeot Van the day before, and he met us at the Airbnb in our new Mercedes-Benz van. Was it better than the old, crappy van? Well, the engine and suspension almost certainly were, but the interior was… somehow worse. Kit, who was riding in the front seat, in the middle, at least didn’t have to worry about having the shifter hitting his left leg, since it was an automatic. I, on the other hand, in the passenger seat was a bit more cramped. I expected better from you, Mercedes. Get your shit together.

Steve had booked us all a tour at the Pilsner Urquell headquarters and brewery, located in a town called Pilsen in the Czech Republic, so we headed there first. The drive was relatively uneventful, though we did leave a bit later than we expected, and the initial GPS estimate said we were going to be late. Jason made up for lost time by driving the van way, way too fast, and by the time we hit the Czech border we were 25 minutes ahead of schedule. At first, I was confused why we were bothering to go to Pilsner Urquell, since I’ve seen it, but never had it, and assumed it was just another pilsner-style beer. Pilsners make up like 60-70% of all beer worldwide, including a lot of American macro brews, so I just assumed it was Steve’s favorite beer, and we were all being dragged along. 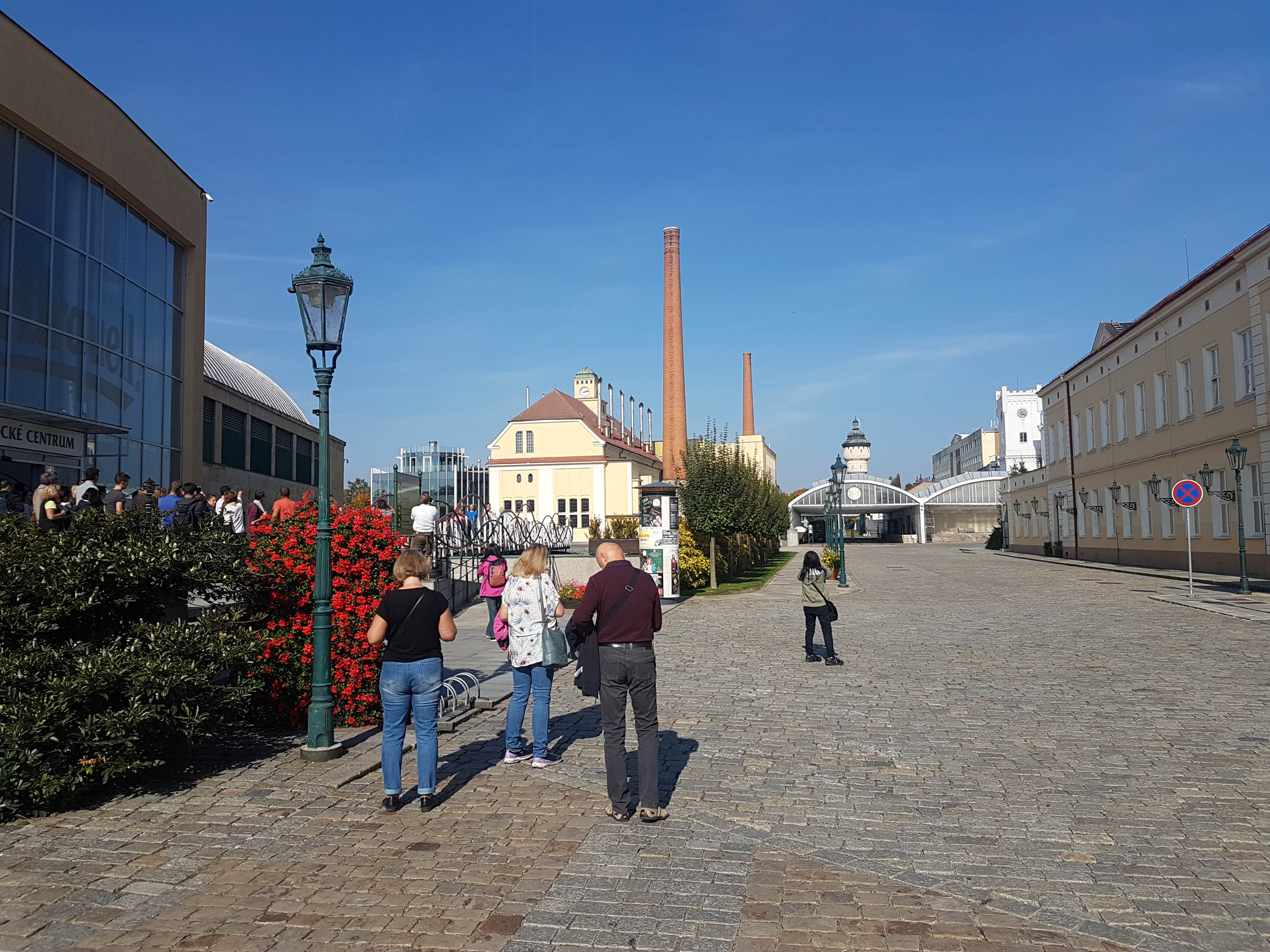 Turns out it’s not just another pilsner, it’s the first pilsner ever brewed, which is actually pretty cool! The Czech people are certainly very proud of it, and you can buy it just about anywhere. We showed up to the brewery about 30 minutes early, so I grabbed some Czech money from the ATM, then wandered the grounds and drank 4 seltzers. Shortly thereafter, we entered the brewery and began the tour. After Kit and my underwhelming experience at Heineken, I wasn’t expecting much. The tour guide was friendly though, and since we were on the English tour we got some good information about the origins of the brewery. Then we set off to tour each section of the large campus.

The brewery itself is an interesting blend of modern and old, since they were bought by one of the huge brew companies a few years back, but have preserved the old methods of brewing, as well as the historical buildings that housed the original breweries. We started off in the packaging plant, a modern building built about 10 years ago, in an impressive 7 months. It was cool! I’ve never actually been inside a modern food processing plant, and everything was very shiny, with a million pipes and conveyor belts. Unfortunately for us, all of the lines were shut down for cleaning, so we couldn’t see anything in action. It was pretty clear though that, had it been running, it would have been pretty awesome. We didn’t spend too much time here, and the guide moved us on to the next location. We traveled primarily by bus, which seemed unnecessary, but whatever Pilsner Urquell, it’s your call.

Next stop was the old brewhouse, which was used up until the construction of the new one about 10 years ago. We ascended in “the largest elevator in the Czech Republic”, and watched a “panoramic movie” about the brewery. There, we got a primer on how the pilsner was invented. Long story short, Pilsen tried to brew beer for a long, long time, and failed miserably. They brought in a Bavarian brewmaster who helped them develop the method and recipe to for pilsner style beer, which soon took off worldwide. The copper kettles and such were all still there, and an effort had been made to preserve the style of the building in it’s original form. A neat chalkboard-style video talked about the brewing process itself. From there, we proceeded through a hallway to the new brewhouse, which surprisingly simply had larger versions of the same copper kettles! Apparently they’ve made an effort to keep everything the same in terms of the brewing process, even though it’s apparently slow. I liked that.

After the new brewhouse, we descended into the maze of cellars that were used to mature the beer. Pilsners are layered, in a cool environment, which requires the cellars to be nice and cold. They were. We’d left our jackets in the car, since it was hot outside, and I regretted not carrying mine. The cellar complex was awesome! Everything was cold and damp, and we were shown a map of just how extensive the cellars were, stretching for acres. As we made our way through the chalk-painted tunnels, we eventually were shown the barrels where a small amount of the beer is still matured in the old-fashioned way. They use this beer to taste-compare the new beer that’s matured in stainless steel tanks. Pretty smart! Then we actually got to drink the beer out of the barrels! It was pretty neat getting to drink the unfiltered beer out of the barrel, there aren’t many places in the world where you’d get to do that. It was pretty good, though pilsners aren’t usually my thing. The tour concluded by showing us the massive ice rooms they used to use to chill the cellars, replaced now by modern refrigeration. A few people on the tour tried to fit through the narrow hole of a barrel, like the coopers used to do to clean them. It’s a small hole, but everyone managed to get through. We emerged into the sun again, and then left to find dinner.

We ended up grabbing it at the Pilsner Urquell restaurant in town, which was pretty good! I got a half duck with red cabbage, and an assortment of bread dumplings. After having eaten, well, nothing by 4 seltzers and half a cherry pastry, it was tremendously good. I wasn’t in the mood for beer, having drank so much the previous day, but most of the others had at least one. 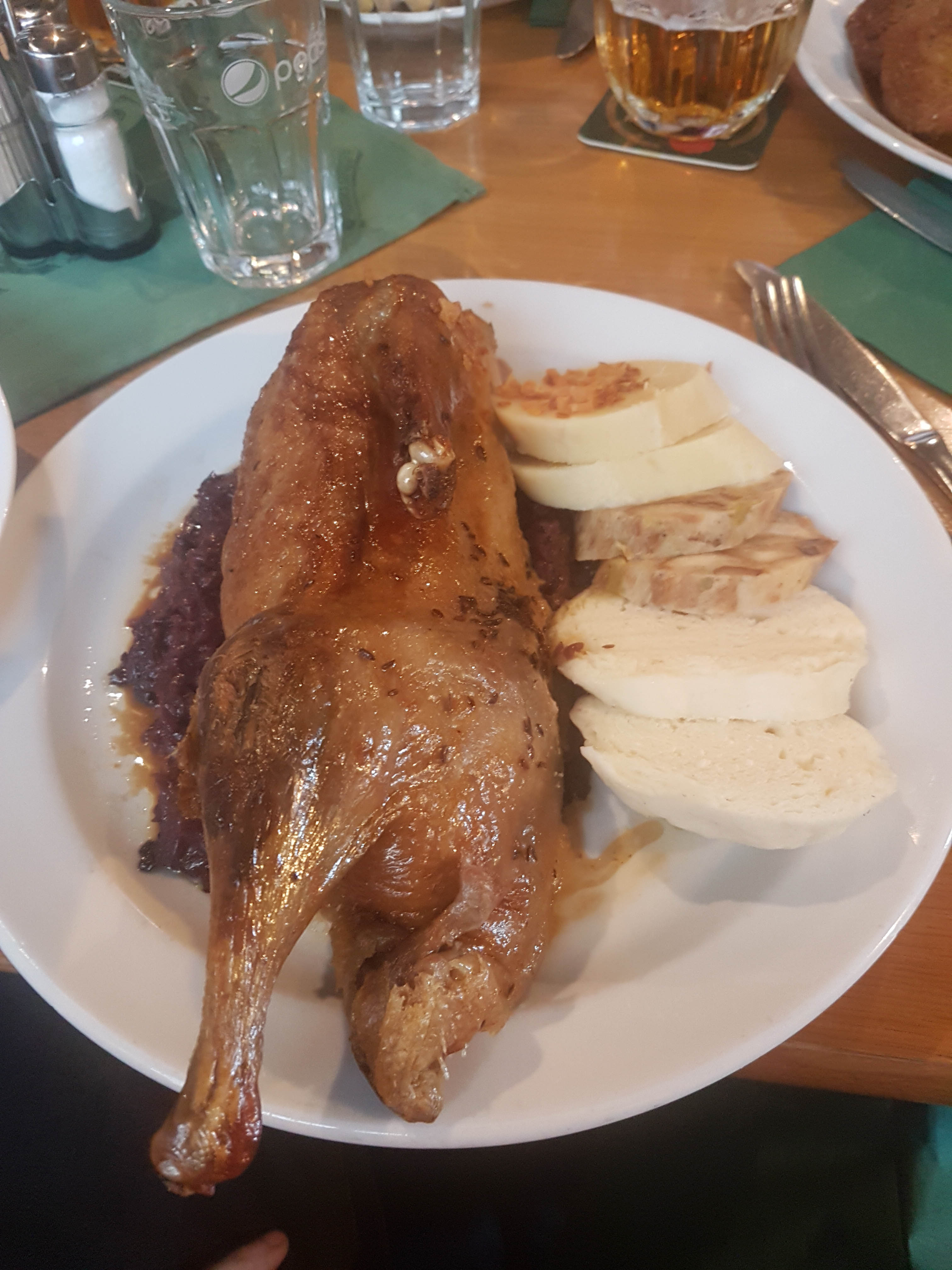 Afterwards, I was absolutely stuffed, and we got back in the car to head to Prague. The roads in the Czech Republic are, well, hilariously weird in their approach to where lanes begin, end, etc, and it was fun trying to predict where the hell we were going next. The highway into Prague was super small, and lined with… Czech flags, that appeared to be billboards, but were just flags. Arriving super late, we ascended the five flights of stairs to our Airbnb, where I then spent 30 minutes reverse engineering the wi-fi network settings, since DHCP didn’t seem to be working, and no one could connect to the network. Once I’d helped everyone get connected, I went to bed, exhausted, though most of the group went out to explore Prague. I wanted the sleep, and I figured I’d have the whole next day to explore anyway.

Prague, Our Last City In Europe

I began my day in Prague with, I’ll admit, some trepidation. This was the first place I’d…

After our brief sojourn to Castle Wolfenstein (probably), we continued on our way to Munich. If there's one thing…