I began my day in Prague with, I’ll admit, some trepidation. This was the first place I’d been that wasn’t explicitly… western, and lacking the Romantic and Germanic word forms I’m used to, I really couldn’t understand anything. Usually, I can hazard my way through what something means, but when the word for “attention” or “warning” is “pozor”, well, you’re kinda screwed, Kit was leaving that day, so I got up early, and headed out with him to explore the city before anyone else was up. 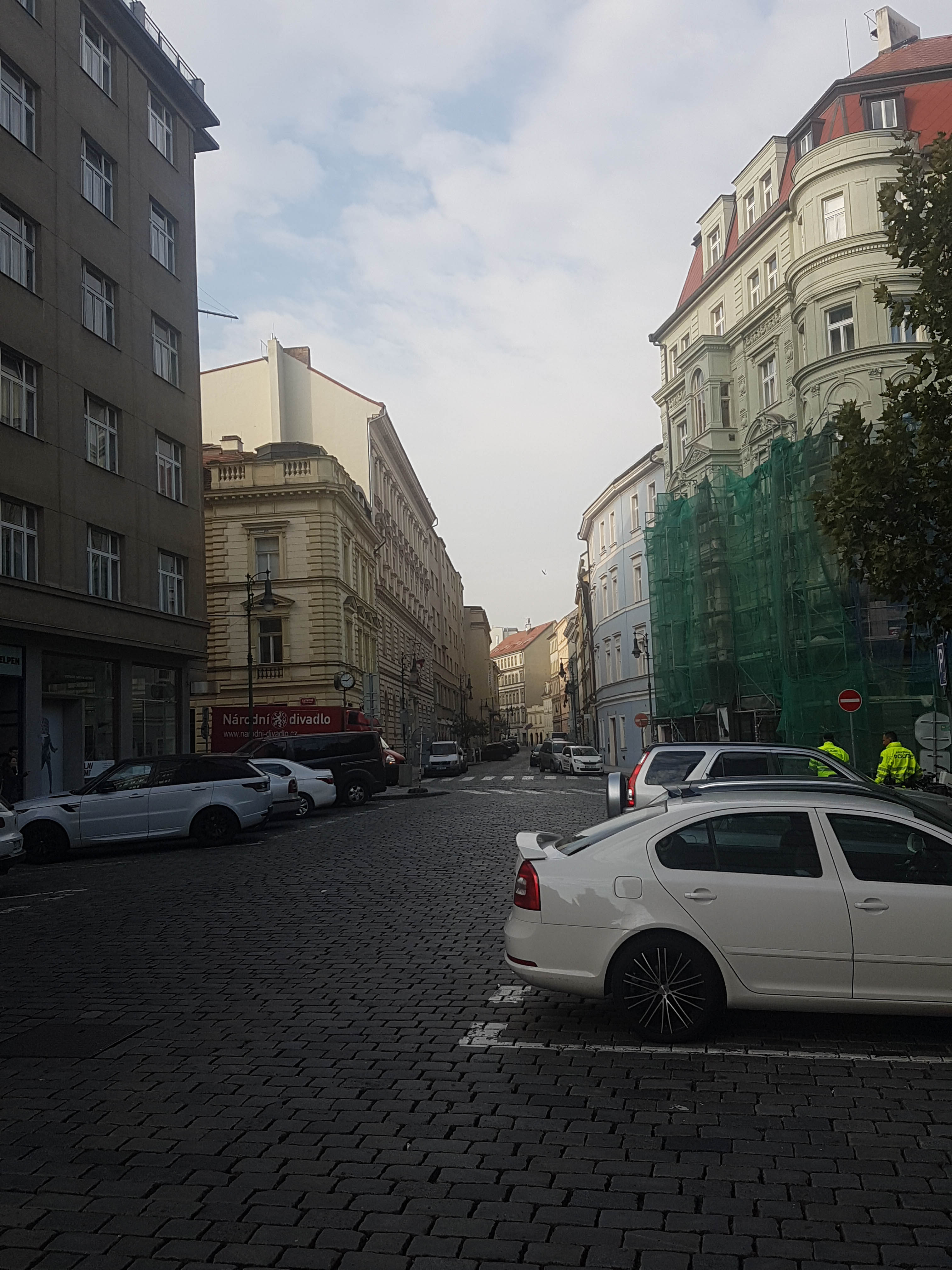 It did not rain once the whole time we were here

Prague is very pretty. There’s a tremendous amount of variation in architecture and color, and everything is very, very old. We made our way from our Airbnb to a main square, which even at the early hour had a fair amount of people in it. I stopped to get a grilled pastry on a stick, called Trdelník, and it was… fine. I think I got a bad one though, because the ones I saw in other shops were roasted over an open charcoal frame, and filled with all sorts of fillings. OH WELL. We finally got to… Charles Bridge? I think? It’s a pretty old, ornate bridge that crosses the river, connecting one side of Prague to the other. Prague is apparently divided into 7 or so sections, referred to as “Praha 1”, or “Praha 2”, Praha being the way the Czech spell Prague. On the other side of the river (Prague 2?) there’s a really old, really awesome castle on a hill, the foundations of which date to the 400s. I didn’t actually go see it, but it looked far, and Kit had to get back to the Airbnb so he could go to the airport. I saw about 17 castles on this trip, I don’t have too many regrets. We did see an awesome astronomical clock, though, the oldest surviving I think. I think that was better than the castle.

On the way back over the bridge, we noticed that it was beginning to fill with stalls selling various art and trinkets. While Kit talked to/haggled with some guy selling watercolors, I made my way over to another stall to make my own souvenir purchase. After our respective transactions were completed, we made our way back to the Airbnb, where I just sort of flopped down for a while. When Kit (and John) was finally ready to travel to the airport, I tagged along with Jason as he drove them, since I didn’t feel like walking around anymore. The drive took about 30 minutes, and during the time we saw Czech KFC, Czech McDonald’s, and a whole bunch of other stuff that looked delicious because I’d eaten nothing. Jason and I then drove around Prague in our large van and took in some sights. Since the roads are paved with so many cobblestones, this made for a bumpy ride, but we saw some stuff we probably wouldn’t have seen otherwise, so it was worth it I think.

We got back to the Airbnb, where we again just chilled for an hour or so, taking a brief nap. Then, the two of us headed out into the city again, to search for more souvenirs, take more pictures, see more things. Earlier in the main square, I’d seen some guy roasting some ham, and I was like “I want that ham”, so we went and got some. The guy gave me like, enough ham to feed 4 people, and then it cost like 700 Czech money, which is like $35! Turns out they do this to tourists because unless you know to order, like, 200 grams of ham, they just screw you over. The upside it, holy cow was that some good ham. Like, best ham I’ve ever had. I don’t even really like ham. Jason also ordered some potatoes, also containing Prague Ham, and sauerkraut. The ham came with 3 pieces of bread too. I ate all the ham, and the bread, and a bite of potatoes, then fought to stay awake as we made our way back to the Airbnb to die of a heart attack. Prague ham, you are delicious, but I’m pretty sure you’re the number one cause of death in the Czech Republic.

After a short rest and drinking a lot of water to offset the Prague Ham, everyone came back, then went out again. I decided that instead of going out, I’d go for a run, since I didn’t have time the next day, and I needed to work off some of the Prague Ham. I didn’t expect great things, since I’d already hit my Fitbit step goal for the day, but I went for the full hour, and it was pretty good! I saw some less touristy parts of Prague, the major shopping district, and I ran along the river for a while. The river was the most interesting part, since the boats lining it are essentially a bunch of floating bars. I even saw, like, 2 other people running, so I guess I was one of five people running in Prague that day. Go me! I had gone across the river, then tried to make it back across that old bridge, which proved to be impossible due to tourist congestion. So I walked across, ran to a convenience store near the Airbnb, and bought some seltzer, an avocado, and an orange, since I didn’t think my body could really process any more meat. 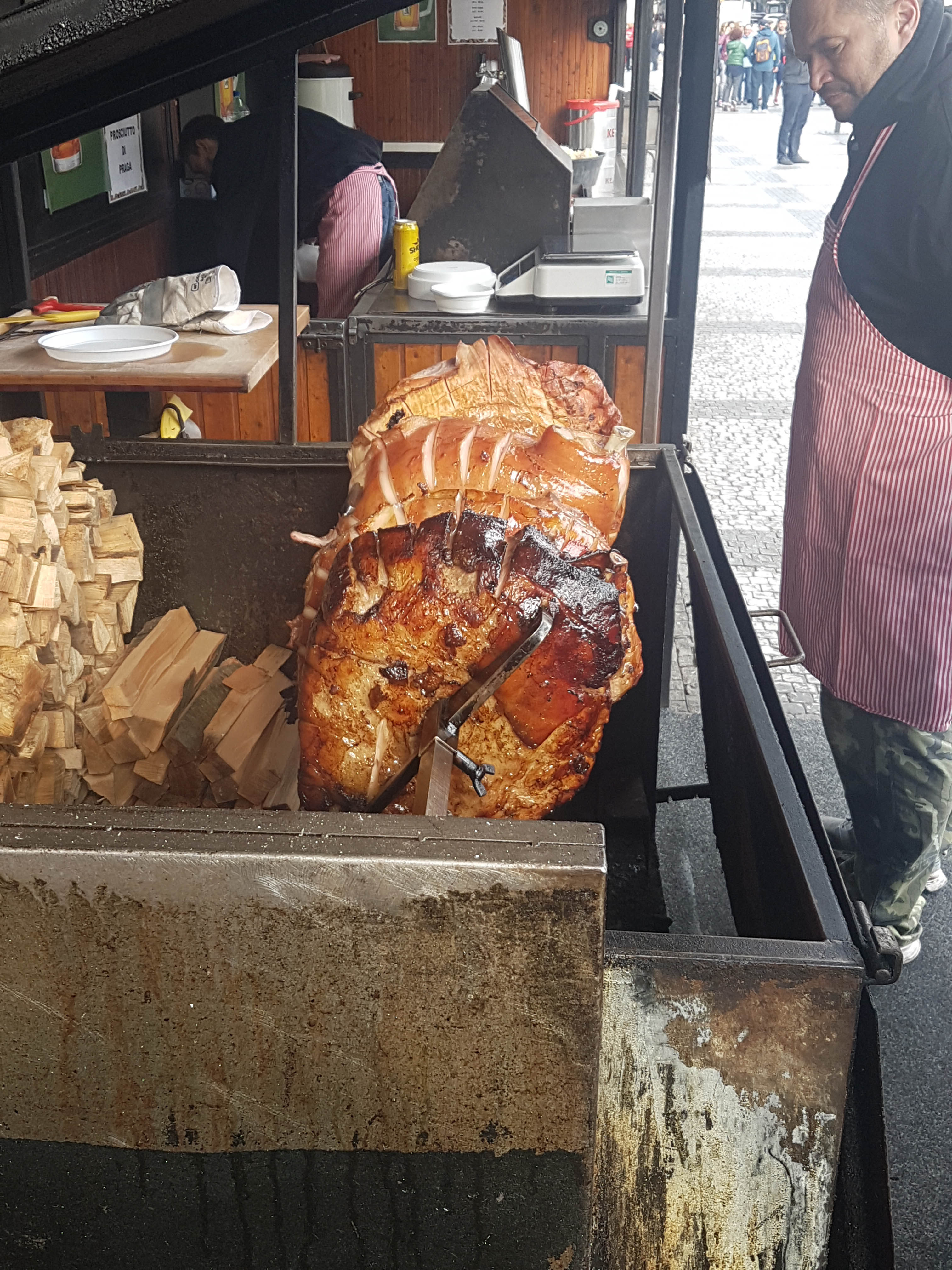 The avocado was fine, and I threw away the orange, and then just chilled at the Airbnb. My batteries for going out and eating/drinking had run fully dry at this point. I wasn’t the only one, and a few of us chatted for hours into the night, which was kind of nice, and reminded me of how we used to spend a lot of our time in college. I miss that, and it’s not something I really do regularly now with any of my Boston friends, which sort of sucks. Around 10:30, I headed to bed, and got up this morning to head to the airport with Jason around 7:30. The guy form Lufthansa didn’t charge me for my extra bag, which was nice, and since I had a business class upgrade I got a nice lunch on the first let. After a short delay on my flight to Frankfurt, and some ridiculous lines at passport control, I finally boarded my flight to Boston, where I should get in around 3 PM. This Europe trip was pretty fun, and has made me want to come back to visit some other countries, like the UK, and Italy, and probably Germany again (during not-Oktoberfest). I’ll be glad to be back home, though. I’m tired, and it’ll be nice to eat some familiar food, and not have everyone around me speaking a different language.

I'm continuing to make my way through the Make My Car A Race Car plan, and until today I…

Pilsen, A Pleasant Detour On The Way To Prague

After the tremendous 8 hours that was Oktoberfest, we awoke the next day to venture out of Germany to…