We went there! On the way from Bamberg to Munich, we went and visited Neuschwanstein Castle, the castle that a lot of fairy tale castles are based on. It was a bit of a drive out of the way, but it gave us a good opportunity to see the Alps, as well as one of the top tourist destinations in Europe. This, and the subsequent drive to Munich, would be my last drives of the trip, since we'd be turning in Van #1 in exchange for a different van more... suitable for the Czech Republic? Anyway, we had some pretty views of the German countryside, as well as some hop farms! 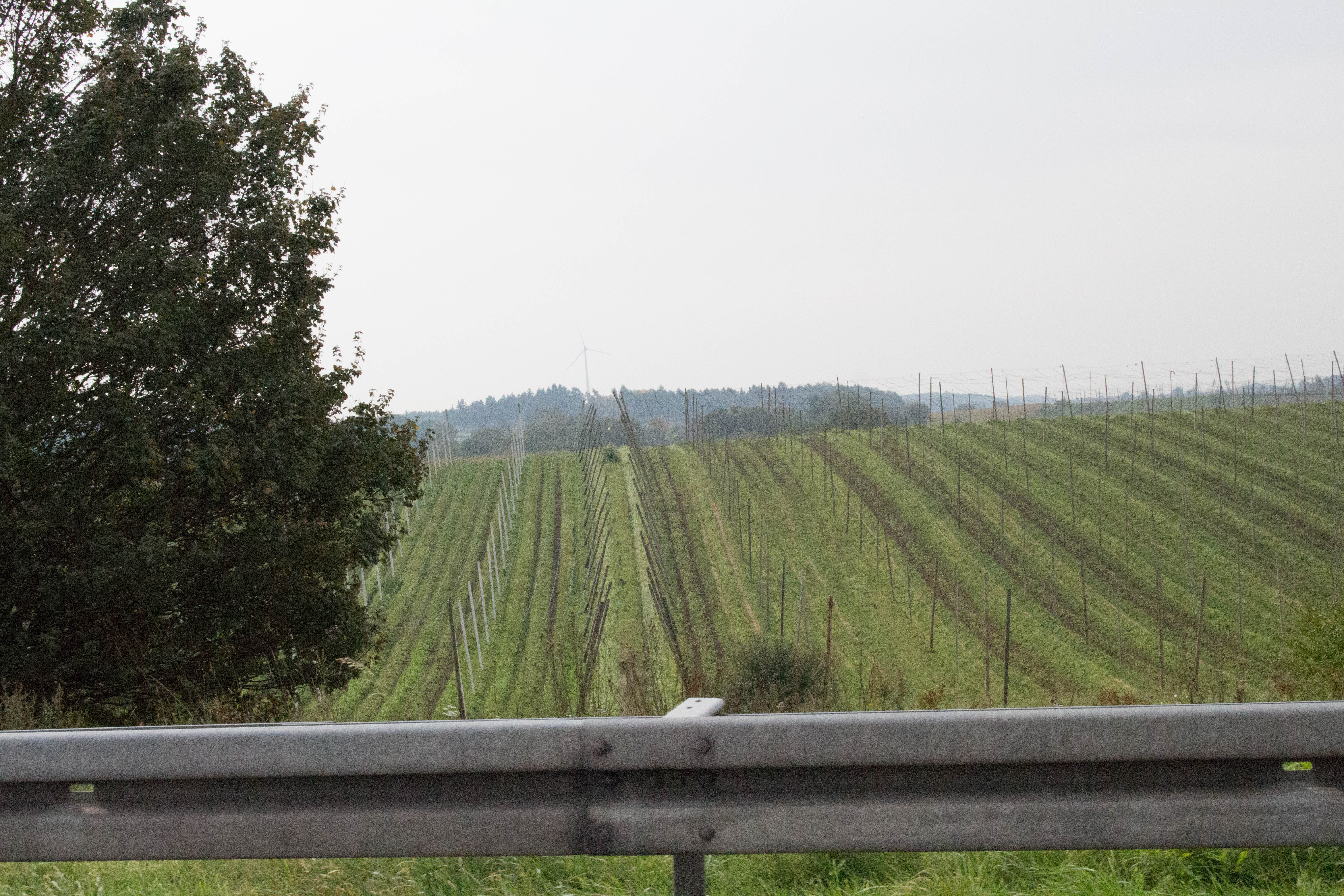 We had from 5-8 to check into our Airbnb in Munich, so we booked it all the way to the castle, only to learn that our tour of the castle wouldn't be until 5:15. So we kicked around the tourist town for a while, ate a lunch, and awaited our turn to ascend the mountain to the castle. There was a really cool lake, and a bunch of trails that you could walk around that gave you great vantage points to check out the fall foliage over the crystal clear water.

Finally, we ascended the mountain. We did so via a bus that went about a 100mph up a steep, windy road with no guardrails. We were pretty sure there's a gorge filled with destroyed, rusted out buses that didn't make it up the mountain. At the top, we got out, and joined the hundreds of other English-speaking tourists as they made their way through the woods. Kit led us to a bridge that overlooked the castle. As we approached, it became clear that I didn't want to go on the bridge. There were like 300 people on it, and it was made out of rickety wood. I made my way onto the bridge, slowly, and snapped a couple pictures of the castle. They, and a picture of the foliage from our higher vantage point, came out really good! 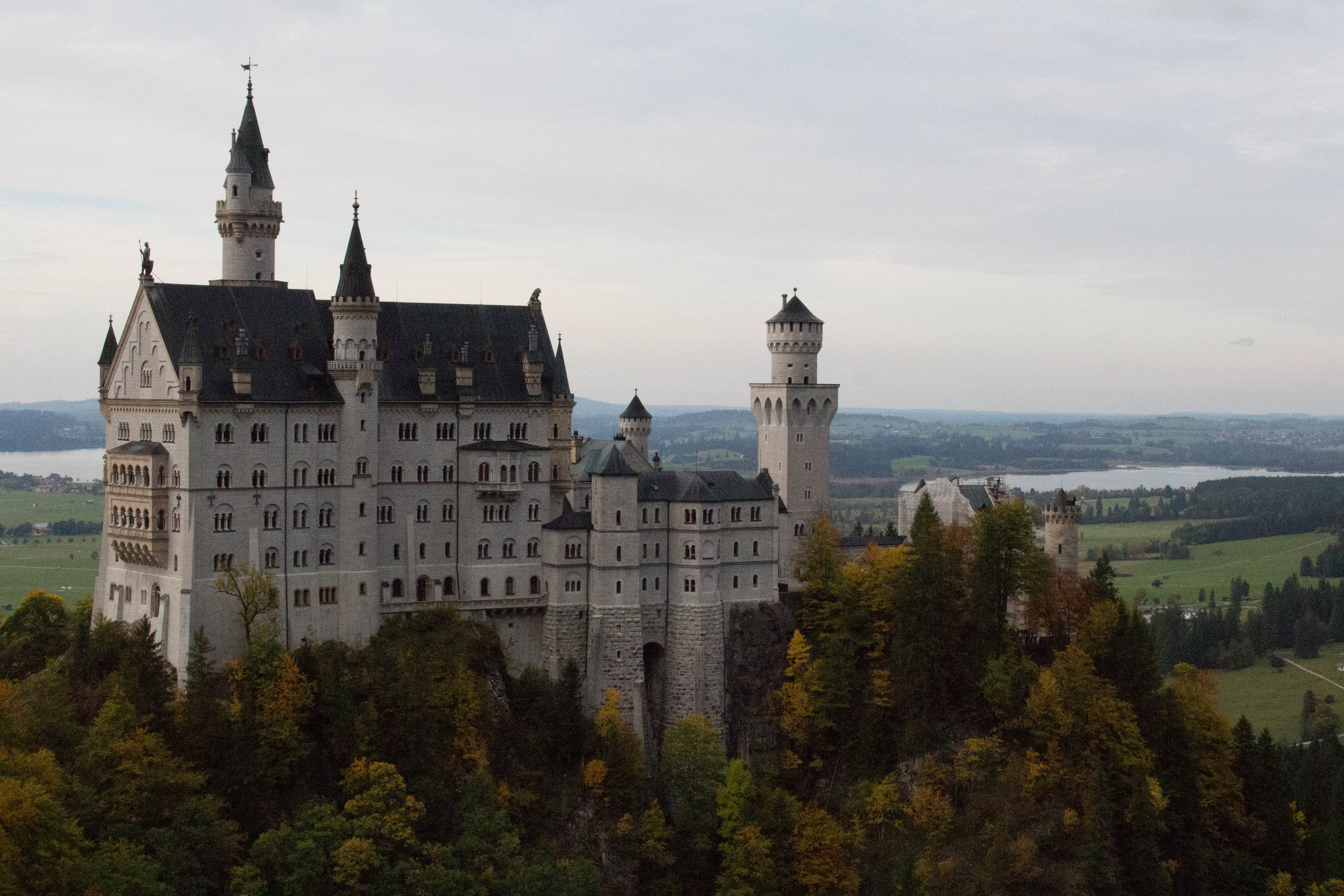 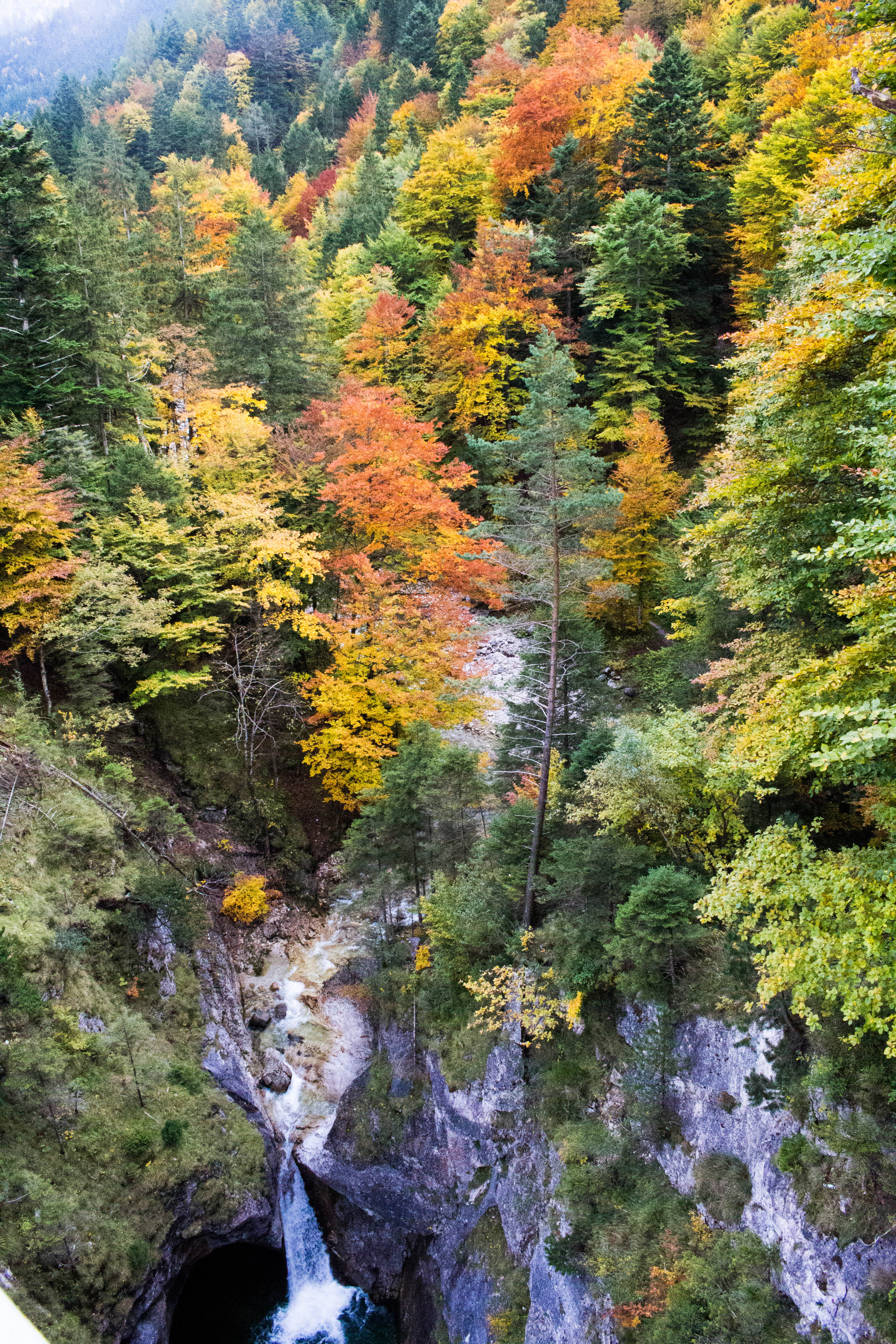 After running away from the bridge, we headed on down to the castle, to start our tour. The road approaching the castle took a winding route along the walls of the castle proper, giving us a nice up-close look at the details of the castle. As we entered the courtyard, the "no cameras" signs started to appear. Oh well. After a couple minutes the tour began, and we began to learn about the history of this fairy tale castle. They even gave us little hearing aid remotes, which was cool, so people in the back could hear.

Ludwig II, King of Bavaria, was responsible for building the castle. It exists as a tribute to Wagner, and the interior is decorated with tributes to his works and to classical theater and art. It's extravagant, and way more tastefully done than I would have expected. The swan is a prominent motif present in the castle, unsurprising since it was the king's favorite animal. The most interesting thing about the castle is that only 40% of the interior rooms are finished. Ludvig was deposed for spending too much money on castles and things, and died under mysterious circumstances shortly after his ministers declared him insane. Was he insane? Who knows? He certainly enjoys a pretty OK reputation today as a patron of theater and the arts. I did manage to get some good exterior shots from around the castle, it's pretty clear why he built it where he did.

Afterwards, we headed back down, and to the van, where we continued our drive to Munich. All in all I'm glad we visited. The Alps are pretty beautiful, especially in Fall. I'd love to come back again. 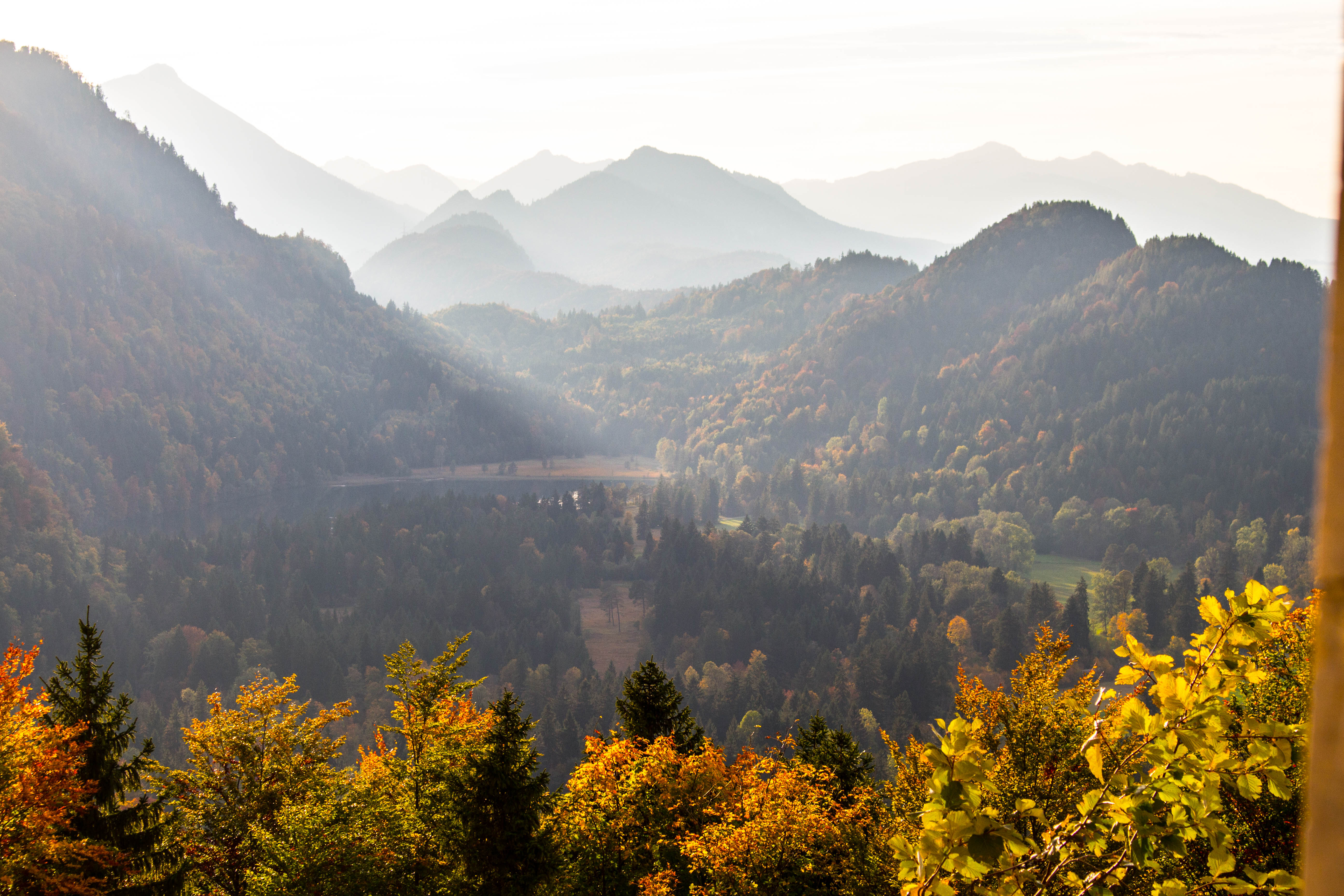 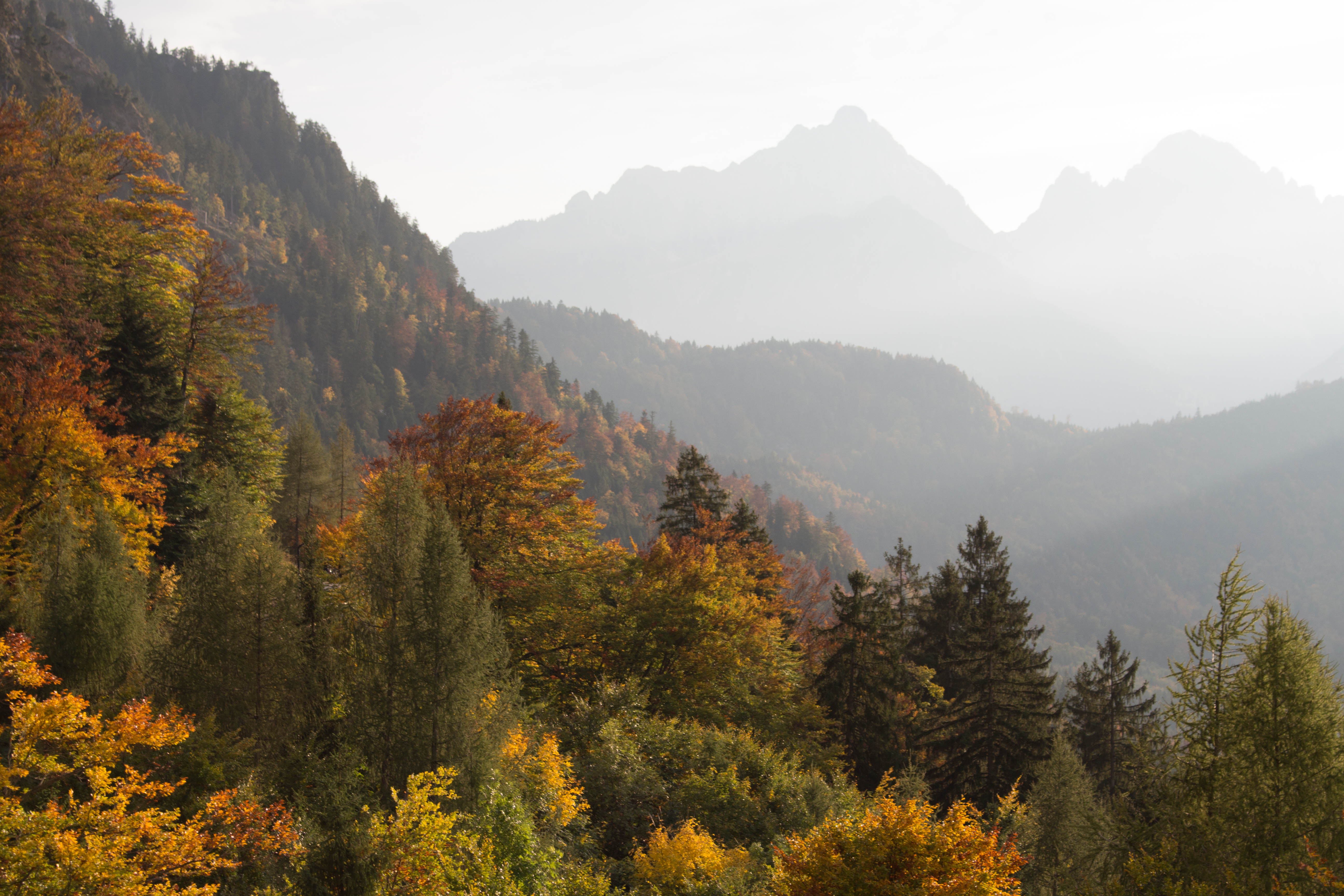 After our brief sojourn to Castle Wolfenstein (probably), we continued on our way to Munich. If there's one thing…

Beer and Castles and Meat in Bamberg

Today we spent the day in Bamberg, Germany, a city that is, in its entirety, a UNESCO world heritage…