Today we spent the day in Bamberg, Germany, a city that is, in its entirety, a UNESCO world heritage site. It deserves it! The section we're staying in is the "new" city, and sure enough it feels like a modern city. BUT just a kilometer or two away lies the old city, and going there is like stepping back in time. This section avoided a lot of the damage that destroyed other German cities during WWII, and it shows. You're walking along city streets and you're like "oh, these must be historical re-enactment sites, like Plimoth Plantation". And then you see that everyone is wearing modern clothes, and the businesses are actual modern businesses, and you're like "ohhhhh, guess this is just really old then". I really enjoyed the dichotomy between the outdoor mall 500 meters away from a beer hall that dates to at least the early 1800s. 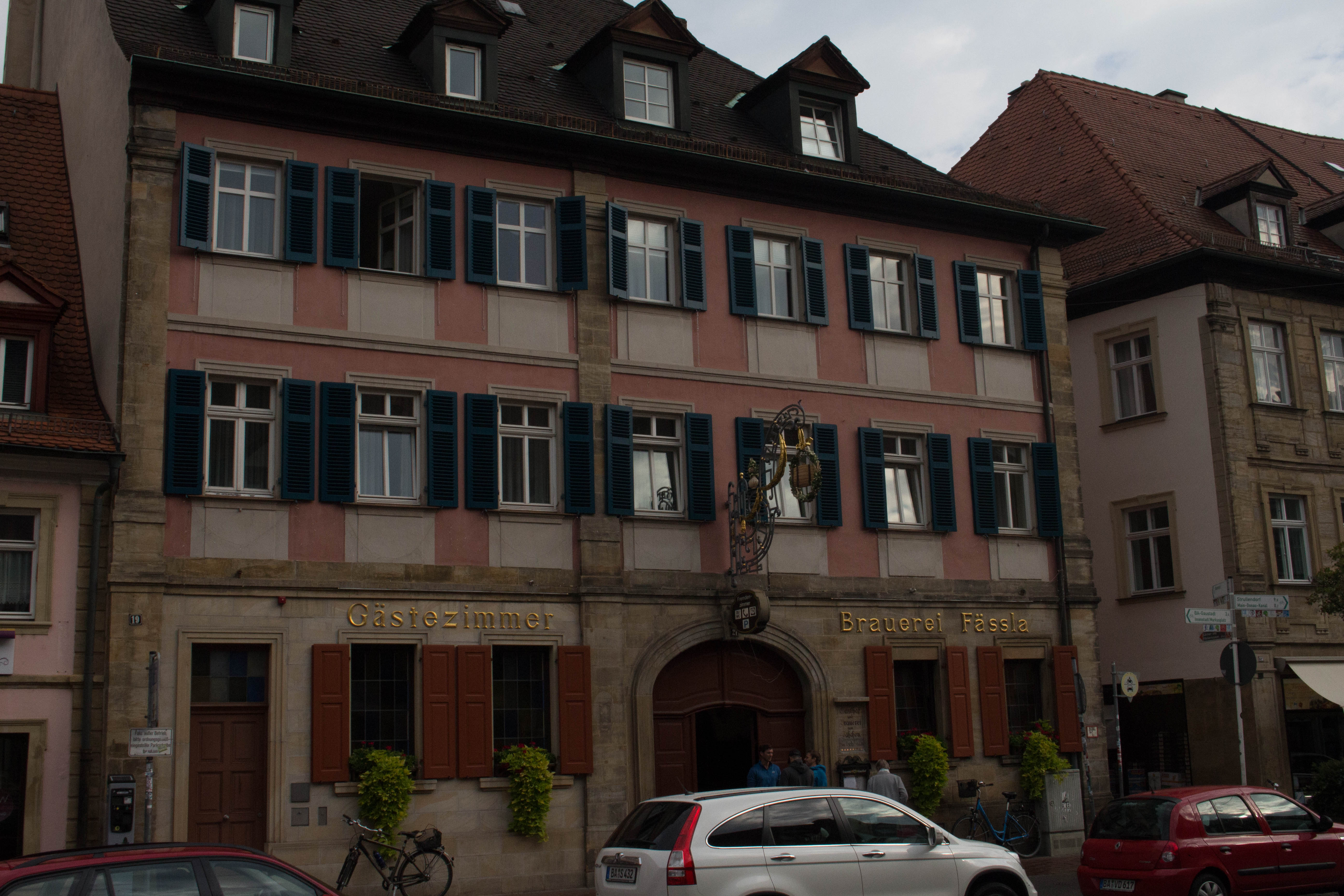 A different, but no less exciting, beer hall

We started the day visiting another church (there are lot of churches here, thanks Jesus), and taking in the statues, paintings, and ornamentation. I'll admit, there is a big part of me that is super pissed that these churches are so ostentatious. I was raised Catholic, and was taught the piety, and helping the poor, etc, were the capital values of the church. So you, uh, used expensive wood, stone, covered everything in paint and gold leaf? While there were still poor, sick, starving people? The common refrain is "we were doing it to venerate God!", but I'm pretty sure that's sort of against the whole teachings-from-the-gospels thing. ANYWAY it sure is pretty now, thanks corrupt bishops! Your contribution to our shared world heritage allows me to capture pretty pictures, even if on the whole you and your leaders were heretical scumbags.

After the church, we headed to the Neue Residenz (New Residence), the seat of Bamberg Prince-Bishops until the 1800s. It's a pretty impressive building, both outside and inside. We asked for a tour, and were told that English tours have to be arranged in advance, but a tour guide was nice enough to offer a shorter tour for a 1 euro discount. On the tour, we got to see the residences of the royalty that once lived there. As is typical in these sorts of places, it was alternatively breathtaking in it's artistic flourishes and hilarious in it's dated gaudiness. Walls covered in silk? Paintings depicting the weak-chinned princes as great heroes? Check.

The imperial hall was honestly very impressive though, completely painted, with a well done 3D effect visible only when standing in the very center of the room. Seeing the old style fireplaces, and hearing about the various trials and tribulations of the inhabitants was fun, too. I enjoyed how relieved our guide was when we told her she didn't have to explain the whole "Holy Roman Empire" thing. Guess AP Modern European History was worth something after all. We weren't allowed to take pictures of the rooms, only the outside and the art galleries. Everyone agrees that medieval art, the kind with dead Jesus, messed up contorted bodies, and everyone looking exactly the same, is the worst.

We left the residence, and decided to grab lunch. We went to a Hofbraü Bamberg, a restaurant that was featuring dishes with chanterelles, so of course I decided to pursue that. I got a salad with sauteed chanterelles and bacon, with some bread and butter, and a bit bottle of sparkling water. Man was it good. Afterwards, we went to another cathedral, just next door to the new residence. Something something mo' cathedrals mo' money.

After leaving the cathedral, we made our way up a mountain. Or a large hill. Anyway, our goal was Altenburg Castle, located on top of Bamberg's largest hill. "It's only a 20 minute walk!" they said. "Exercise is good for you!" they said. They're all full of shit. Walking up that goddamn hill was horrible, through bug infested woods and fields wearing flat shoes meant for roads, not dirt and gravel. I was also toting my camera and souvenirs. After complaining for 30 minutes, and a couple of breaks, we made it to the top of the hill where we found out we totally could have just driven the stupid van up. OH WELL WE'RE SWEATY NOW SCREW IT. The castle itself was pretty awesome, but what was even better were the many awesome views of the surrounding area. Got some great looks at the German countryside, Bamberg itself, and some neighboring German towns in the distance.

While climbing back down the mountain, I met two awesome cats! One descended from 3 stories up to come say hi, while the other was making his own trek up the mountain. I took pictures and added them to @thatzeldacat and gave them a lot of scratches. Afterwards, the group split up. A few people went to go buy lederhosen, which are essentially overalls with leather shorts, for Oktoberfest in Munich. That was both expensive and not something I wanted to do, so I set off to buy another bag suitable for air travel, so I could transport my souvenirs. After locating one, and acquiring it, I headed back to the Airbnb to chill for a little bit, develop my photos, and finish (technically yesterday's) blog post. I set out at 6:45, with a couple friends who'd also come back to the Airbnb, to meet the rest of the group for dinner.

We ended up getting dinner at Schlenkerla, the place where we'd had beer the day before, so we could get Bamberger Zwiebel, which is an onion stuffed with ground pork roasted in smoked beer. The other option was Fränkische Rauchbierhaxe, a smoked pork knuckle in beer sauce. We shared a bit around, and holy cow were they awesome. I could eat that every day. Coupled with the meat, cheese, and pickles appetizer we got, and a bread and cheese side dish I got, and a couple of pints of delicious smoked beer, we were stuffed. Good thing I climbed a mountain today. Afterwards, most of the group headed out to have a couple more drinks, and I came back to the Airbnb to chill and develop the rest of today's photos. Tomorrow we head out to Munich, stopping at another castle along the way. Hoping to get a run in here, before we leave, so I can see a little more of the city before we move on to the next one.

That Castle That Fairy Tale Castles Are Based On

We went there! On the way from Bamberg to Munich, we went and visited Neuschwanstein Castle, the castle that…

I got up early during our last day in Köln, so I could go for a run. With all…