A lot of decisions are hard. In general, the larger their impact on your life, the harder they are to make. Thinking about some of the most important and difficult decisions you might have to make, some obvious ones come to mind. Getting married, buying a house, having a child, moving to a different region or country. One that I think often goes overlooked is deciding to find a new job, and shortly following that is deciding where you want to work. You're making the choice to forgo the relative financial security you enjoy in favor of new opportunity, while also sacrificing the relationships and some of the knowledge you've accumulated over the last however many years. You also spend a huge portion of your life at your job, both on the clock, and in the amount of thought time that it takes up in the off hours. So it wasn't easy for me a few weeks ago when I decided to leave Hudl.

I've worked with some great people, made some great friends, and produced some cool products in my time here. I started a little over two years ago, when the company was in a mode of explosive growth, and based on my previous experience I was thrown directly into the fire. Being thrown into the fire is sort of my thing, and at Hudl I thrived. They made me a dev lead within the first year, and I was the technical lead for a team called Exchanges, where we built cool software so teams could easily share video and data with one another. The opportunity to work with one of the top soccer leagues in the world was incredible, and I was given a lot of freedom to try and explore my talents at all levels in a modern web software stack. 8 months ago, I made the switch to a backend team, working to re-architect our core microservices platform to run in Docker containers in AWS. It was a different kind of team and workflow than I had been exposed to in the past, and I enjoyed it a lot, even if I did miss building consumer product. 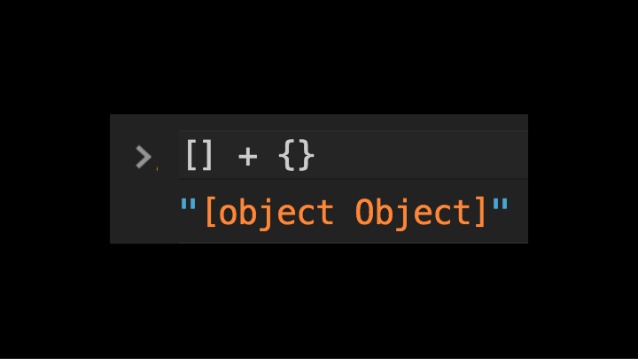 How quickly we forget the joys of writing JavaScript

However, not everything was great for me at Hudl. I loved getting the opportunity to meet people from different parts of the country, and travel there (Lincoln, NE is a great city), but almost immediately I felt isolated. I went from being in a global HQ, to being in a satellite office where I was the only "Hudl" engineer. The location of the office was downtown, which was exciting and new, but we had poor internet which made it hard to even do daily standups with my team. I was really excited for us to to grow the Boston office, and sure enough we hired some fantastic people. The Boston office of Hudl has evolved into a place where top notch individuals across all roles of a modern software product company work and have fun doing it. Our facilities are also top notch, something impressive considering how much of a bet the office was from a growth standpoint.

Feeling like an island never improved that much, though. I worked with a PM on my team, but I felt the pain of not being able to interact with my colleagues or the engineers that reported to me in person. It was also a struggle not being able to have those face-to-face discussions with leadership that go a long way towards influencing culture and engineering approach. My impact as a manager consequently felt muted, and my responsibilities didn't line up well with where I wanted to take my career. I made a team change, to the backend team, in the hopes that this would spark something new in my viewpoint. It didn't, and when I hit my two year mark I decided to make a change. A lot of these concerns weren't actually global to Hudl as a company, since I think that they have a great path to success, they were more specific to how they related to me and how I approach engineering. There was just a disconnect there, and it was clear that for me it wasn't working. 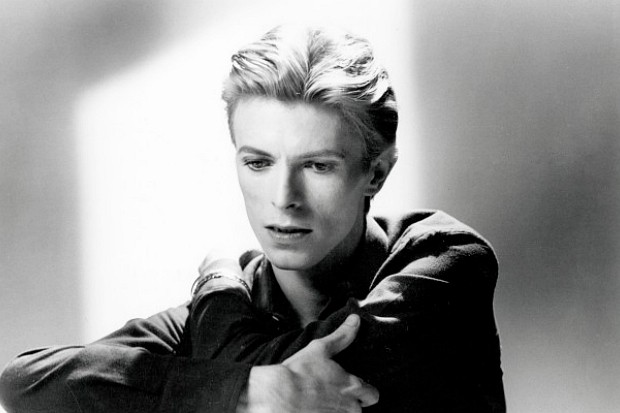 I also decided to listen to a bunch of Bowie

Casting my net fairly narrowly to start, my job search rapidly expanded to other companies based solely on personal connections I had in the Boston software scene. I eventually settled on 6, and began the process of interviewing. It was... intense. Software interviews, especially for highly technical lead roles, are very difficult. Some of the roles were for senior engineers at small, early stage startups. Others were for lead track positions at larger, more established companies. Boston based was an important criteria for me, as was the actual product, and the tools used to build it. Wherever I went, it was also important that the role and company aligned well with where I want to take my career, i.e. starting my own company, giving me a great opportunity to learn and grow towards my goals. While it was crunch time at work for me, it was also crunch time for interviews, and I was spending upwards of 15 hours a week having phone calls, doing projects, and meeting people for coffee. When it got to the final round stage, I had 4 interviews in one week. It was nuts, but I got through it, and did better than I expected.

If I could do it again, I'd restrict my search to one size of company. One thing that rapidly became clear was that the compensation was going to vary widely depending on where I landed. Compensation isn't the most important thing to me at this stage of my career, but it is an important thing. I needed to make sure that I made at least as much cash as I made at Hudl, and the small startups were willing to offer that plus some equity. The bigger companies were offering more. A lot more. This made it difficult to make an informed decision about the product opportunities at large vs small companies. I'd also make an effort to restrict myself to software stacks that I'm expert level on, or at least have a huge interest in learning and hammering on. It made it difficult interviewing when I couldn't get super excited about the language I was going to be using, and in one case I wanted to change and rewrite everything. Not the best interview pitch. 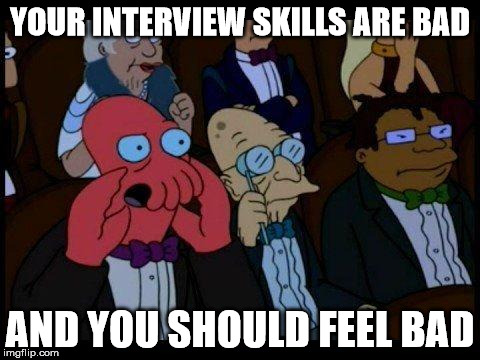 This is how I felt in every single interview

While interviewing, I also took the time to email an old boss at TripAdvisor and ask him to grab lunch. Part of it was just a desire to reconnect, since we had a great working relationship and we'd been out of touch for a couple of years. The other part was that I hadn't been to the new HQ building off 128, and I wanted to satisfy my curiosity and say hi to some old coworkers. What I didn't expect was how many changes they've undergone since I left. There are some very cool and modern projects poised to take TripAdvisor into the next stage of its lifecycle as a company, and I was given a pretty great story on how I could be a part of it. I left feeling very conflicted. Should I include TripAdvisor as an option in my job search? I decided that I wouldn't, at the time, since I was worried about falling for my own biases, since I knew that I had been pretty happy at Trip. However, when I got offers and had a handle on how to price myself in the software market, I'd have a conversation just to see what sort of role and responsibilities I'd be looking at specifically. Historically, Trip had been very good to me, but I needed to do some due diligence before deciding to commit to it as an option.

Eventually, I received offers from a few of the companies I'd interviewed with, and I also reached out to TripAdvisor to see how interested they were in me returning to work there. They were interested, with some incredible opportunities from both a technology and a career perspective. I talked to old friends, current employees, former employees who had recently left, and all had really good things to say. It also became clear that I had a good reputation there, despite my leaving, and I probably wouldn't have to worry about any sour grapes. On Wednesday night, I agonized over the decision of which company to pick, Trip included. To what's probably no surprise at this point, I ended up deciding to go back to TripAdvisor! The opportunity to take some of the components of that site and take them where we could see it going years ago is just too compelling a story for me to pass up. That, plus the opportunity to work again with some incredibly talented people who I also count as friends, is really exciting to me. I look forward to continuing to develop and grow my lead skills there, at a pace and direction that I feel comfortable with. 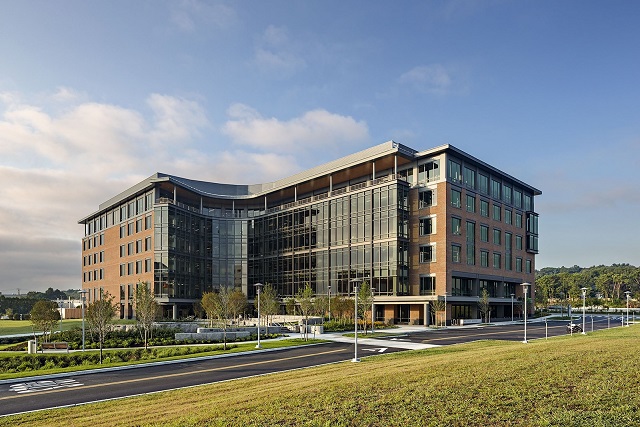 Plus, finally I'll get to work in that building I was promised for 2 years

I'm ending at Hudl on May 26th, and starting at TripAdvisor on June 26th, taking a month off in between. The past year has been very, very difficult for me, job stress excluded, and I'm looking forward to taking a month off to do a hard reset. In the meantime, it's been an emotional rollercoaster at work. My decision to leave took some by surprise, some not, and I'm leaving a lot of friends behind without the benefit of having them live in Boston. Keeping in touch will be a challenge, even though it's easier than ever with the internet. Next week I'll wrap up my work, transition my reports to their new manager, and make an effort to make it clear to everyone that I work with that I think they're incredibly valuable people, and that they all have bright futures ahead of them. And who knows? The Boston software scene is a smaller and smaller world, and chances are I might work with some of these people again. Now, if only I could get some of the Nebraska people to move to Boston...

I Went For A Run Today

I'm now on day 3 of my month of not working, and I've started to make progress towards the…

The Sun Is Great

Winters are generally a pretty tough time for me, and this last one was no exception. I really love…