I got up early during our last day in Köln, so I could go for a run. With all the walking we've been doing, I haven't had the energy to run like I should be, but I am trying to do it every other day. Our Airbnb was only a couple of kilometers from the Rhine, so I decided to make my way over there, since I figured it'd be flat, and I'd have room to go at an easy pace. Once I got there, zero regrets. The river was very pretty in the dawn light, with commuters, runners, and a massive pack of schoolchildren (seriously, like a hundred) making their way along the banks. I even saw a couple of (German!) runners, which is nice, because I rarely see other people running while I'm out, and it makes me paranoid I'm breaking some sort of cultural taboo about running. I decided to go for the full hour, instead of a half, since I had the time and I felt pretty good. 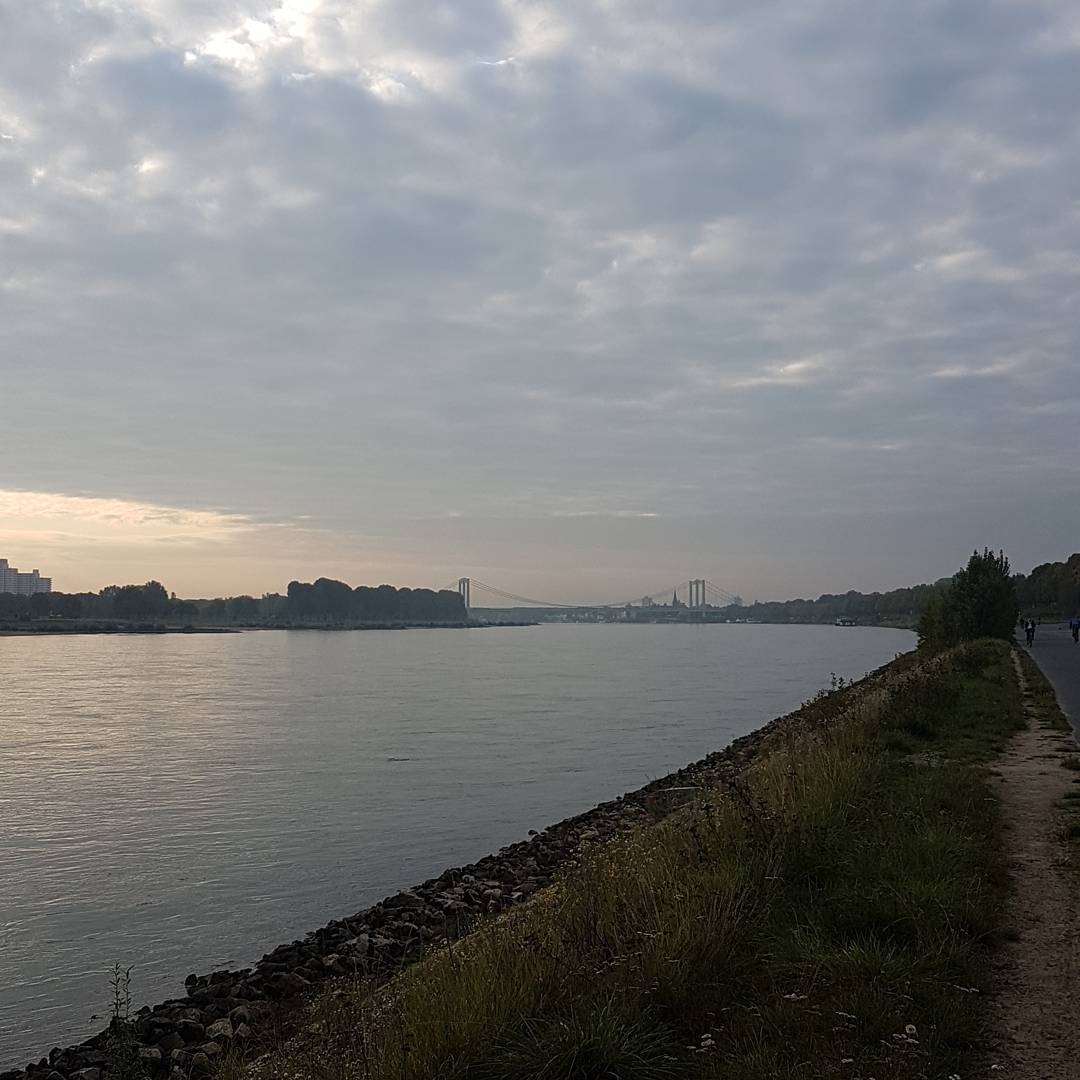 It was pretty nice out

When I got back to the Airbnb, everyone else was awake and beginning to shower. We had to be out by 10 am, so we packed up our stuff, and brought it to the car. Though we'd visited the cathedral the previous day, we hadn't got to climb the tower and look out off of the observation deck, so we made our way back over there. HOWEVER I decided to take a detour to the Köln Dunks I'd found on my run! Turns out Köln Dunks totally sucks, advertising iced coffee they don't have at both of the locations I went to. I got some hot coffee (which was pretty awful, compared to normal Dunks), but drank it anyway out of solidarity. Germany, you're pretty cool, but what's your deal with ice? Get your shit together, iced drinks are the way they were intended to be enjoyed. 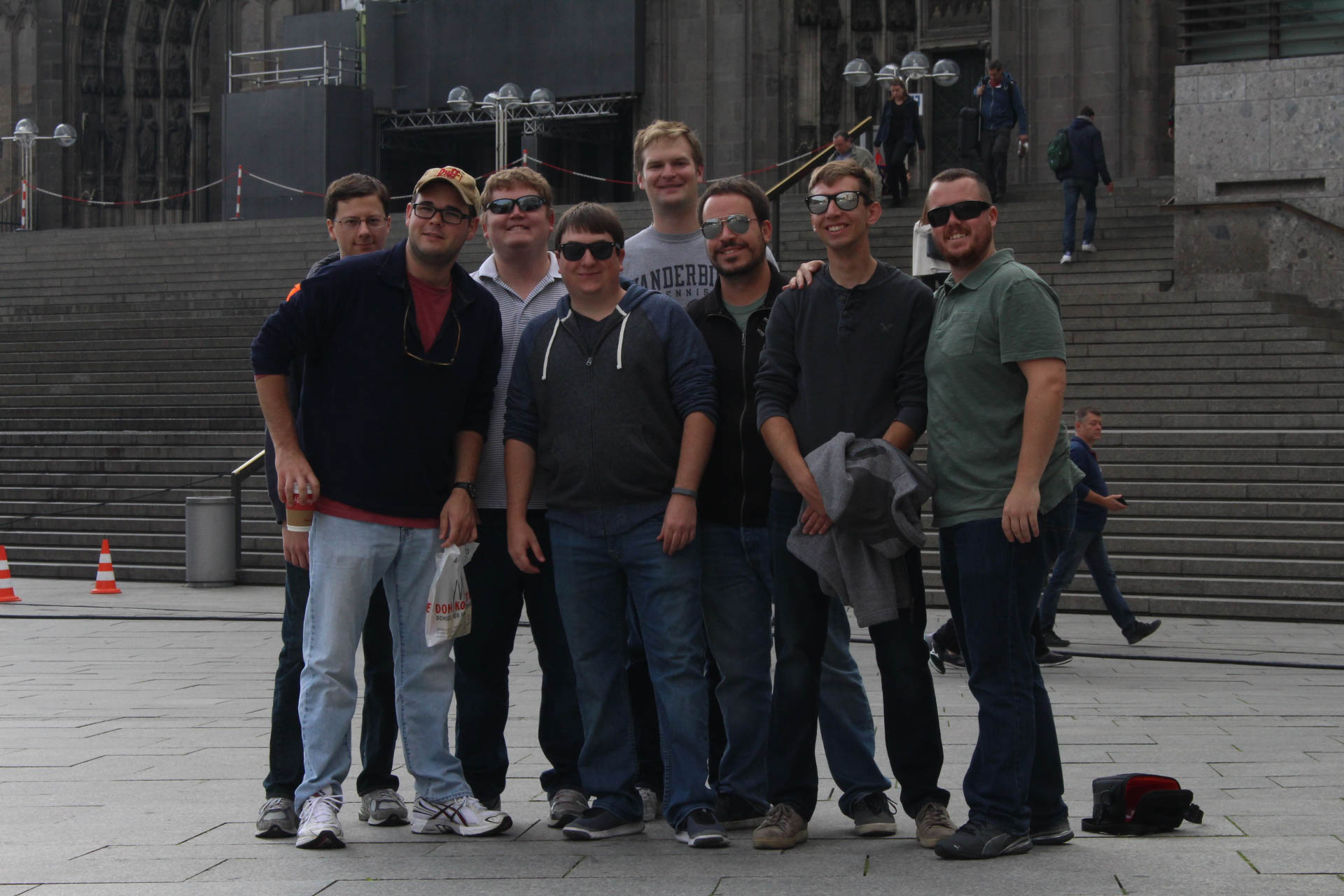 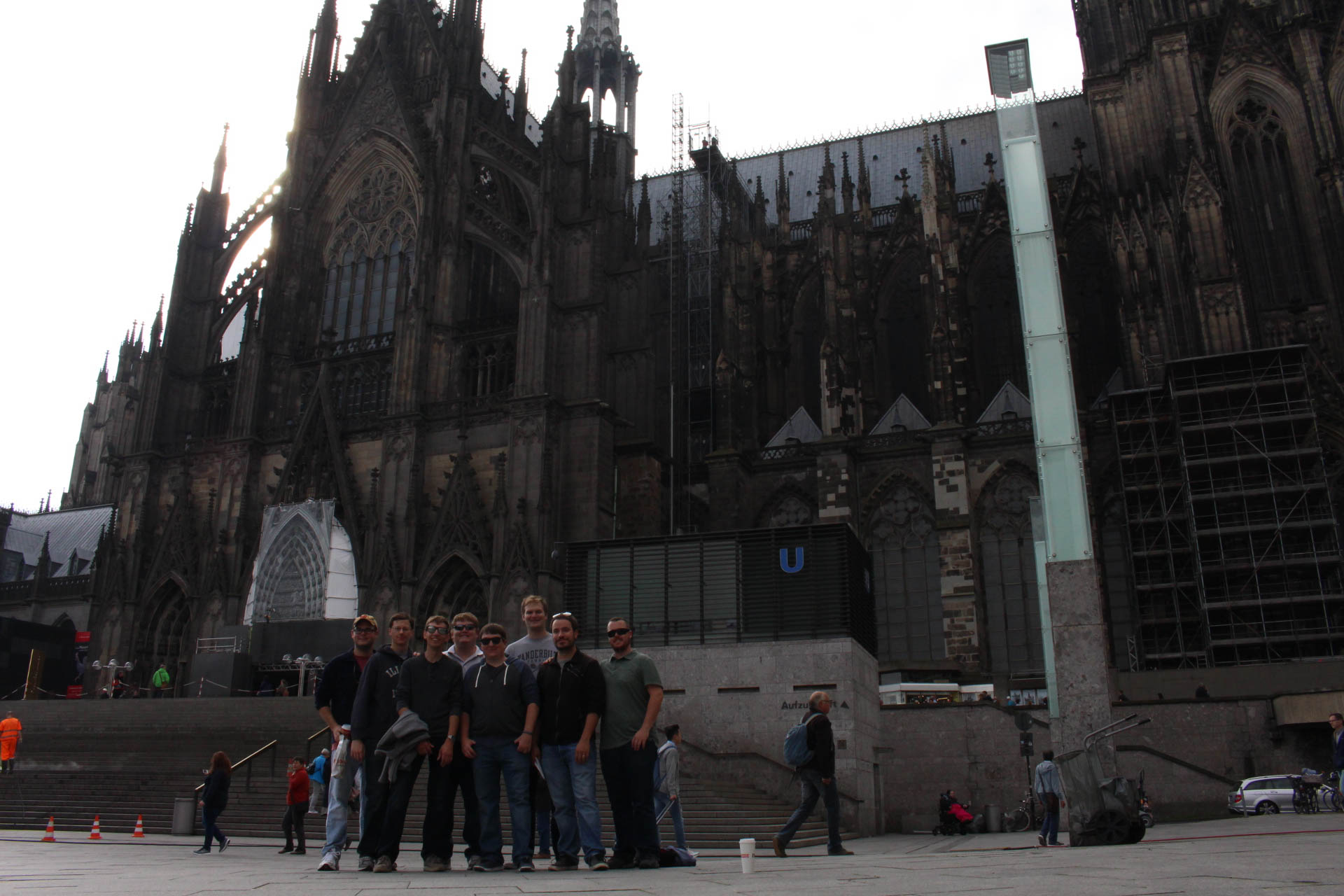 We took a photo

After meeting up with the rest of the group (the tower turned out to be closed), we got a quick bite to eat (me, a cheese sandwich from "Kamp's", which seems like German Panera), and shopped for souvenirs. Then we made our way to the van. I was driving today, and steeled myself for Van Performance. I was not disappointed, because I expected the worst! Pretty sure the van has less horsepower than my Focus, but the clutch is soft, and it at least accelerates in first and second gear. It is fun that it's a diesel, since it sounds like I'm driving a truck. In total, we had about 4 hours of driving to do, with our ultimate destination set as Bamberg. However, we decided to break up the drive with a stop at Münzenberg Castle, about two hours away.

Turns out that was a good idea, because being in Van totally sucks. The castle was awesome. It's located in a small town in the German countryside, surrounded by farms. It was originally built in the 12th century on the top of a hill, and while it's mostly in ruins, a significant amount is still standing. We explored the various tunnels and passages, checking out the old masonry and the various ruined rooms from the inside of the castle. Old ramparts were still available to walk on, around the perimeter of the castle. Finally, we climbed one of the towers that was still standing, getting some awesome views of the town, countryside, and farms. After failing to get food in town, we got back in the van and made our way down the road a bit, where we got a quick sandwich atn what seemed to be the headquarters for Hinnerbäcker, a German bakery chain/wholesaler? Anyway it was pretty good, and we set off for Bamberg.

After only a couple of pit stops at rest areas for fuel/bathroom/snacks, we arrived in Bamberg around 5:30 pm, and made our way to the Airbnb. In this Airbnb we reserved space for 8, but have 9, so it was a little tense checking in. It didn't help that the parking spot that they had for us was not large enough for our 9 passenger van. I tried a couple of different angles to back it in, but with the German owner watching me, and really long cars parked on either side, I eventually gave up and just parked it on the street overnight. We'd be able to park it in the lot the next day, after some of the other cars move. The Airbnb is very nice! It's a hotel that they rent rooms out on Airbnb, and everyone has separate beds, etc. It's very quiet, nice to have a place where it should be easy to sleep.

I'd eaten very little all day, so I was glad when we sought out dinner. Kit has been here before, and knows where the good food and beer are. First, we grabbed dinner at Brauerei Fässla, a pretty awesome brewery and restaurant. I ordered braumeisterschnitzel, which is basically a pork chop, pounded flat, fried, smothered in onion beer gravy. Holy cow was it good. I also got some spätzle with mushrooms for the table, and it was excellent too. I had salad and fries as a side, and I traded up for some other people's potato dumplings. Think I ate... 7 dumplings? Anyway that, plus 4 beers, meant I was very, very full. Totally worth it. We went afterwards to get some rauchbier at Schlenkerla, a historic brewpub that's only 1 of very few places that still brews beer the way they did in the middle ages, drying the malt over an open flame, which gives it a smoky flavor. It was delicious. I'm definitely going to have some more before we leave.

Beer and Castles and Meat in Bamberg

Today we spent the day in Bamberg, Germany, a city that is, in its entirety, a UNESCO world heritage…